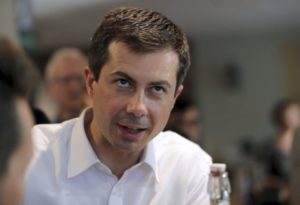 Mayor Pete Buttigieg on Wednesday called the fight against climate change possibly worse than the global struggle against the Nazis in World War II.

“This is the hardest thing we will have done certainly in my lifetime as a country, this on par with winning World War II,” he said. “Perhaps even more challenging than that.”

Buttigieg lamented during the CNN town hall on climate change that it would be impossible to confront the threat if Americans were still disagreeing about climate change.

“We’ve got to figure out a way to rally and that means everybody,” he said, promising to lead the globe in the ongoing fight against the threat posed by climate change.

Buttigieg said he was “excited” by the idea of using the military to solve the problem of climate change.

“The military has an amazing capacity to rally, to achieve what is being asked of them,” he said.

Buttigieg spoke about the military as a tool for enacting progressive ideas, despite traditionally being thought of as a conservative organization.

“Even though we think of the military as a conservative institution, there are times when the military has actually been out front relative to a lot of parts of America,” he said.

He argued that the military led the way for Americans to accept racial integration as well as gays serving openly in the service.

“Imagine if we harness that same ability to get things done when it comes to the biggest crisis on our plates,” he said.

He proposed the government make all military bases carbon negative and force Navy ships to run on biofuels.

“Climate security must be deeply integrated into all aspects of national security planning,” he wrote in his proposal.