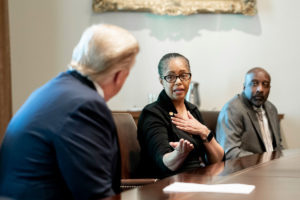 Petty Democrats are on the hunt, you’re either with them 100-percent or against them. There’s no room even for gratitude and honesty anymore.

Here are the facts:

March 18, Rep. Whitsett and husband visit their doctor regarding symptoms that are later diagnosed as COVID-19.

March 31, after seeing President Trump talk about the anti-malaria drug hydroxychloroquine in a daily briefing, Rep. Whitsett talks to her doctor and starts getting treatment.

April 6, when interviewed about her COVID-19 recovery, Rep. Whitsett admits she would never have asked for the drug if the President hadn’t pushed it. When asked whether she believes President Trump saved her life, the Democratic Rep. said: “Yes, I do,” and “I do thank him for that.”

April 14, Rep. Whitsett visits The White House and meets President Trump and Vice President Pence in a meeting of COVID-19 survivors. During the meeting, Rep. Whitsett again said: “Thank you for everything that you have done.”

She also appeared on Fox News and said: “For me, it saved my life. I only can go by what it is that I have gone through and what my story is, and I can’t speak for anyone else. So that’s not what I’m trying to do here. I’m only speaking for myself.”

Surely, thanking the President for something that is personal, not political isn’t bad optics for Democrats, it shows class and manners.

CHECK OUT: Joe Biden is under investigation for sexual assault and yet the mainstream media isn’t even hiding its double standards.

The 13th Congressional District Democratic Party Organization will vote on whether to censure Rep. Whitsett but the outcome, unless pressured from outside sources, looks inevitable.

Kinloch said of endorsed candidates and elected officials: “They do not belong to themselves. They belong to the members and precinct delegates of the Democratic Party.”

Rep. Whitsett’s comments and actions, including visiting the President, going on Fox News, and talking up the hydroxychloroquine treatment have made her a target.

Rep. Whitsett said: “I did not know that saying thank you had a political line. … I’m telling my story and my truth, and this how I feel and these are my words.”

Despite the act of innocence, Rep. Whitsett has also refused to attend a Democrat screening when requested and criticized the state’s Democratic governor, Gretchen Whitmer. These actions may or may not have contributed, but based on the resolution to censure, the issue is all about praising the President’s medical push.

CHECK OUT: Open borders activists like Nancy Pelosi and AOC won’t like the facts in this book.

The resolution to censure Rep. Whitsett says that she has: “repeatedly and publicly praised the president’s delayed and misguided COVID-19 response efforts in contradiction with the scientifically based and action-oriented response endangering the health, safety, and welfare of her constituents, the city of Detroit and the state of Michigan.”

It’s clear, Rep. Whitsett is in this trouble because she is telling her story and because it’s pro-Trump and pro-hydroxychloroquine.

Here lies the problem, the treatment involving hydroxychloroquine has been evangelized and slammed by medical practitioners in equal measure. Yet, the FDA approved it for alternative use, specifically treating COVID-19.

Therefore, Rep. Whitsett is being punished for being positive about the treatment and for thanking the President. Which makes the Democrat Organization look very petty.

If censured, Rep. Whitsett will not get the group’s endorsement, plus she will not be able to participate in the group’s activities for two election cycles.

The President tweeted: “What a joke. Remember folks, the narrative can only be against Trump and if you break those rules the left will turn on their own.”