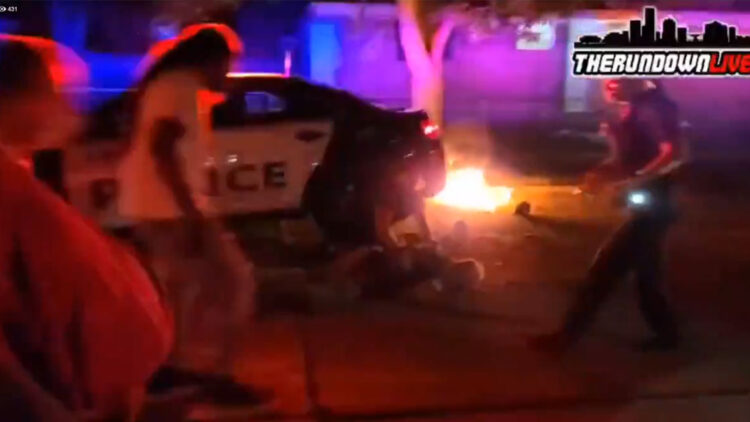 A state of emergency was declared in Wisconsin Sunday, August 23, after a video showing a police shooting spread across social media.

WHAT HAPPENED: Sunday, 5:11 p.m., police officers were called out to a domestic incident.

In the video, a man, now known as Jacob Blake, walks away from a house and around a sports-utility vehicle parked on the street. Two officers follow behind him, pointing their weapons.

Police officers can be heard shouting at Mr. Blake. He ignores them, opens the driver-side door, and leans inside. It is at this point an officer grabs Mr. Blakes’ shirt and shoots at point-blank range.

Several shots can be heard and it is uncertain whether one or more officers fired during the incident.

GRAPHIC VIOLENCE WARNING: If Mr. Blake was heading to the vehicle to get a weapon, the police had seven-seconds to restrain him or use non-lethal force if they feared he was going for a weapon. Watch and judge for yourself.

Police officers provided immediate aid to Mr. Blake. He was taken by helicopter to a hospital in Milwaukee and remains in a serious condition.

The Wisconsin Department of Justice is taking charge of an investigation into the shooting.

The police shooting led to a demonstration.

The protest quickly became violent, with the County of Kenosha declaring a state of emergency curfew at 10:15 p.m.

Demonstrations included the throwing of objects at police officers. Projectiles included rocks and even a Molotov cocktail.

WARNING: In the video below, at around the 10-second mark an officer is clearly hit in the head with an object. The officer falls and looks to be unconscious.

The violence spread to the Kenosha Police Station, where officers allegedly had to use tear gas to disperse the crowd.

CHECK OUT: Protests aren’t allowed on the Mayor’s street, but the rest of the city can suffer.

On The Side Of Protests

The Governor of Wisconsin, Democrat Tony Evers issued a statement as the violent demonstration was on-going.

“Tonight, Jacob Blake was shot in the back multiple times, in broad daylight, in Kenosha, Wisconsin. Kathy and I join his family, friends, and neighbors in hoping earnestly that he will not succumb to his injuries.

While we do not have all of the details yet, what we know for certain is that he is not the first Black man or person to have been shot or injured or mercilessly killed at the hands of individuals in law enforcement in our state or our country.

We stand with all those who have and continue to demand justice, equity, and accountability for Black lives in our country—lives like those of George Floyd, of Breonna Taylor, Tony Robinson, Dontre Hamilton, Ernest Lacy, and Sylville Smith.

And we stand against excessive use of force and immediate escalation when engaging with Black Wisconsinites.

I have said all along that although we must offer our empathy, equally important is our action. In the coming days, we will demand just that of elected officials in our state who have failed to recognize the racism in our state and our country for far too long.”

It is a statement that paints the state’s police department as racist. And at no point does it condemn the violent actions taken during the demonstration.

CHECK OUT: Black Lives Matter mob attacks a man after a car crash, brutally kicking him in the head.

What The Video Shows

What we know from the video is that the police shooting looks like it was the accumulation of bad decisions taken by officers over a seven-second period.

At no point does it look like any officer is being racist, or reacting out of racism.

We hope that Mr. Blake makes a recovery and that, if after an investigation the police officer(s) are guilty, they are punished accordingly.

However, there has to be questions asked of Mr. Blake.

He chose to ignore police officers while they were pointing guns at him. He walked around his car and reached inside the driver’s side. If at any point during those seven-seconds Mr. Blake listened, there would not have been a police shooting.

If police were pointing guns at you and shouting, would you react like Mr. Blake or comply?

CHECK OUT: Watch stupid protesters getting taken down by the police.