Police Tackle Mother As If Armed After Mask Altercation 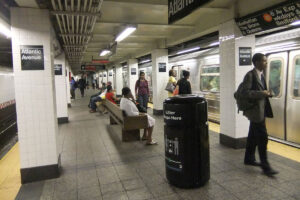 A mother with a young child was treated as if she was armed and dangerous by police in Brooklyn after an altercation that began because they were wearing masks incorrectly.

May 13, the mother, Kaleemah Rozier, 22, was stopped by police officers inside the Atlantic Avenue Barclays Center subway station.

The video shows Rozier and child walk upstairs and across the station. Despite being off camera, you can hear Rozier say: “Don’t touch me,” and it’s at that point Rozier slaps away the officers’ hands. The officers then tackle her to the ground.

CHECK OUT: Fear of COVID-19 crime is driving New Yorkers to their Second Amendment rights but gun stores and firearm checks are shut.

Despite what the tweet says, Kaleemah Rozier was reportedly charged with resisting arrest, disorderly conduct and harassment.

Throughout the video, Rozier is abrupt and uses offensive language towards the police. Yet the police surround her and ignore social distancing in the process. They even make the first physical contact.

The NYPD said: “She responded to the officers with vulgar language and repeatedly refused requests to properly wear her face covering over her nose and mouth.”

In a tweet, Mayor Bill de Blasio wrote: “Face coverings are important to protect everybody — they’re not optional. But no one wants to see an interaction turn into this. We’ve made progress with de-escalation. This isn’t it.”

Ironically, in Texas, the Attorney General, Ken Paxton, wrote letters to local governments stating that they do not have the authority to issue any mask requirement.

Rules obviously vary from state-to-state. Especially in New York City, where COVID-19 hit the hardest. Yet, if the Attorney General of Texas says there is no authority, isn’t the whole altercation unconstitutional?

The issue isn’t about the mask wearing. That’s up to the people of New York.

If this video showed one or two officers escorting the mother and child to the exit while following social distancing rules, and then the altercation happened, there would be no issues.

However, there are several officers surrounding a mother and child. They were giving as good as they were getting, and the offices touched the mother first which triggered the whole incident.

We believe people should treat the police with respect, but it should work both ways.

This is the issue, how can the NYPD act so aggressively towards a mother and child for not wearing a mask properly when there’s many examples of New York officers doing exactly the same, and worse.

At least the above officers were wearing masks, some don’t bother.

When a mother, for wearing a mask incorrectly can be hounded like a criminal and the NYPD say it was handled acceptably, there is a problem. America cannot survive with such double-standards.

Either New York makes masks optional, which would be in-line with the Constitution, or they need to punish everyone equally, which is impossible to enforce.

CHECK OUT: Bailed out airlines ignoring social distancing while small businesses get penalized for the same.