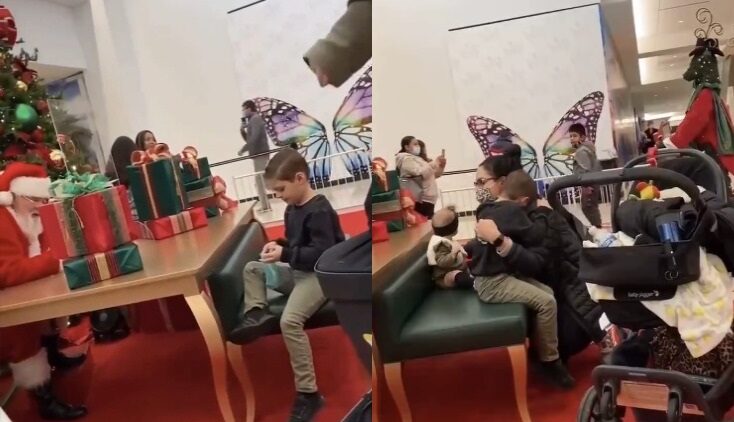 It could’ve been one of those cute videos a parent revisits frequently when the mood strikes because it automatically elicits smiles. After all, what could go wrong with your little boy asking Santa Claus for a gift at the local mall? POLL: Who is the most dangerous?

Well, a whole lot if the St. Nick your kid encounters is apparently of the woke variety.

In the clip, a little boy sits across a table from Santa who asks, “What do you want for Christmas?”

The understandably shy youngster hesitates at first and looks down; you can barely hear what he’s saying.

Soon the kid comes to life and begins to reveal what he wants. But Santa doesn’t seem to catch what the kid says — then cocks his head to the side and utters a noticeably louder, “What?”

Apparently, the boy asked for a gun and Santa immediately shoots that down: “No guns.”

The boy’s mother quickly interjects that her son means a Nerf gun, but Santa is unmoved: “Nope, not even a Nerf gun.”

The poor kid then turns and looks at his mom in disbelief:

“If your dad wants to get it for you that’s fine, but I can’t bring it to you,” Santa continues. “What else would you like? Lots of other toys: Legos, bicycles, there’s cars and trucks. What do you think?”

Then comes the crying

Within a few moments the boy turns away from Santa and begins crying. At that point, his mom — who’s holding an infant — comes over to comfort him.

Mom fortunately tells her son that he’ll still get his Nerf gun — no thanks to the guy in the red suit.

It isn’t clear exactly where or when the video was recorded, but the fact that the boy and his mother are wearing coronavirus masks means the encounter couldn’t have occurred more than a few weeks ago, if not sooner. It was posted Monday to Twitter.

What did observers have to say?

As far as how folks reacted to the clip, it seemed to be a mixed bag.

“The kid isn’t crying because he didn’t get a toy, he’s crying because Santa himself told him that he’s not going to buy him something as innocuous as a Nerf gun,” one commenter wrote. “Just more social indoctrination starting earlier and earlier. The mom should’ve let ‘Santa’ have it.”

But more than a few observers noted that Santa’s hands may have been tied. One offered, “I like to think it was more of a rule that they gave the Santa rather than him denying the kid a toy he’s not even going to be giving him in the first place. Say you don’t give away anything that resembles a weapon or firearm so that the Karen moms don’t get triggered.”

Yet others had little sympathy for Father Christmas: