Reuters Poll Says If 2020 Election Was Today Biden Would Win 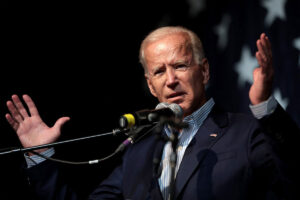 From a sample of 1,115 Americans, an IPSOS poll for Reuters reported that if “people” were asked to vote now, they’d vote for Joe Biden in the 2020 election.

As per usual, the poll did ask more Democrats than Republicans, however, the poll also used a weight so that a vote from a Republican had more value than a Democrat. Which means it was potentially not as lopsided as many other polls that have been conducted lately.

The poll results showed the following:

The poll was broken down further, stating that 26-percent of independent voters would vote for the President, whereas 34-percent would vote for Biden.

We’ve all come to distrust polls after the 2016 election continuously predicted Hillary Clinton would be the next President. However, it is a sign that the 2020 election is getting closer because polls are coming more frequently now.

Plus as polls always seem to have a Democrat bias, it’s inevitable Biden will come out on top in many despite not even being officially announced as the DNC’s candidate.

The poll reported much more data, ranging from how Americans felt towards the direction of the government, the most important issues being faced, and more.

QUESTION: “Generally speaking, would you say things in this country are heading in the right direction, or are they off on the wrong track?”

RESULTS: 56-percent of Republicans voted that the nation was on the right track. 82-percent of Democrats said it was on the wrong track, and 59-percent of independent voters agreed with the Democrats.

QUESTION: “In your opinion, what is the most important problem facing the U.S. today?”

Republicans put unemployment in fourth place with 11-percent of their votes.

QUESTION: “Do you approve or disapprove of the way Donald Trump is handling the following issues?”

RESULTS: 48-percent approved of the President’s handling of the U.S. economy, with 45-percent disapproving. The rest were not sure. The President also performed favorably in employment, with 49-percent of the poll approving versus 43-percent against.

One thing is certain, we’re going to get a lot more information like this between now and the 2020 election in November.