Poll: Trump Will Lose 43% of His Support if Wall Isn’t Built 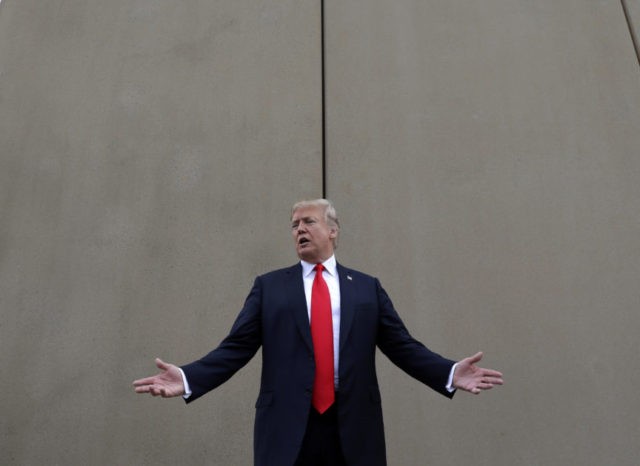 A poll of 2,700 Trump voters shows that President Donald Trump will lose 43 percent of his base of support if a border wall is not built.

What’s more, the poll shows that only 43 percent of Trump voters consider the conclusion of the government shutdown a victory for Trump, even as 60 percent approved of ending the partial shutdown.

The poll, conducted by Ear to the Ground, found that most “Trump voters still support the President for the time-being, even if they view the outcome of the Shutdown Showdown as his loss.”

Trump Announces His New Theme: ‘Build A Wall And Crime Will Fall’

According to the poll, Trump’s base is sticking with him, but without a border wall, his support would collapse almost in half.

On a seven-point scale, the president currently holds a 6.71 level of support, which is down from 6.78 at the beginning of the year. However, among his own voters, support for Trump would plummet to “3.82 if he fails to secure border security funds, a drop of 43%.”

The poll also shows that his supporters, by a wide margin of 95 percent, support Trump building the border wall by declaring a national emergency.

For those wondering why Democrats and the media are adamantly opposed to any kind of barrier or wall along our southern border, this is why.

Any funding for any kind of structure will allow Trump to claim he kept his central campaign promise. And although Democrats and the media know we need physical structures to protect our border, what is more important to both groups is preventing Trump from keeping that promise. They believe, and not without cause, that the fastest way to defeat Trump in 2020 is to destroy his base of support.

Granted, we are a long way off from the 2020 presidential campaign — about 22 months and a thousand news cycles away. A lot can happen between now and then. Meaning, if Trump does not get the wall built, there are plenty of ways for him to rebuild his base of support.

But “Build the Wall” is Trump’s “Read My Lips: No New Taxes” pledge. If Trump is unable to keep this promise, the same Democrats and media who worked tirelessly to ensure the wall was not built will gleefully turn around and taunt him for not keeping the promise his entire campaign was built on.

To be fair, President George H.W. Bush’s “read my lips” disaster was a little different — a situation where a president broke his defining campaign pledge pro-actively, by signing a tax increase.

Trump would never do the equivalent, which would be to sign a bill outlawing a border wall.

Nevertheless, Trump will have a difficult time explaining to his supporters why he was unable to build his wall, why he couldn’t work the art of the deal, especially during his first two years as president when Republicans controlled both the Senate and the House of Representatives.

Personally, I am holding my fire on the whole “Trump Caved” thing. This is a guy with an endless supply of hats and rabbits.