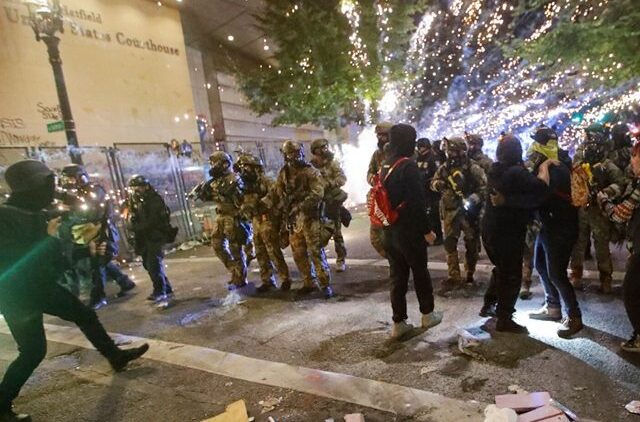 Portland Mayor Ted Wheeler admitted his policies in dealing with Antifa anarchists failed. He called for new enforcement actions and asked for federal and state assistance in dealing with the lawlessness.

“My good-faith efforts at de-escalation have been met with ongoing violence and even scorn from radical Antifa and anarchists,” Wheeler said in a New Year’s Day press conference. “In response, it will be necessary to use additional tools and to push the limits of the tools we already have to bring the criminal destruction and violence to an end.”

“It’s time to push back harder against those who are set on destroying our community and to take more risks in fighting lawlessness,” the Portland mayor continued.

The mayor’s remarks follow violent attacks by Antifa on Portland Police Bureau officers and destruction of businesses in the downtown district on New Year’s Eve. The anarchists attacked their officers with commercial-grade fireworks and firebombs. Antifa rioters threw at least two Molotov cocktail-style firebombs and launched multiple commercial-grade fireworks at Portland police as they attempted to defend the downtown business district and the federal courthouse.

“We should be clear what this was last night, it was about violence and criminal destruction, period,” Portland Police Chief Chuck Lovell said during the press conference.

Mayor Wheeler called upon federal, state, county, and local law enforcement partners to work with him to develop “clear plans to address anarchist violence.” He also asked the Oregon Legislature to increase the penalties for people who engage in repeated acts of criminal destruction and vandalism.

Antifa-related violence ran rampant in Portland through much of 2020 as prosecutors in the city dismissed charges against 90 percent of the protesters arrested in September alone, Breitbart’s Ildefonso Ortiz reported. During the first week of October, only 19 of the 213 people arrested in September had pending charges.

Between May and September, prosecutors dismissed more than 70 percent of charges. In one case, charges of attempted murder, attempted assault, arson, possession of a destructive device, and rioting were dismissed against a man who allegedly threw a Molotov cocktail at police officers.

In December, Antifa built an autonomous zone around a foreclosed house to stop law enforcement from executing an eviction order. At one point, the mayor issued what now appears to be a toothless edict, saying, “There will be no autonomous zone in Portland,” Breitbart’s Joel Pollak reported.

When police arrived to execute the eviction order, Antifa anarchists became violent and chased the police away. The mayor pledged last week that the police were authorized to use “all lawful means” to end the occupation of the foreclosed house and surrounding streets.

That did not happen.

After a week-long occupation of the three-block autonomous zone, Wheeler caved and actually apologized to Antifa. The mayor and his chief of police apologized for statements they made earlier that week where they referred to the encampments as an “autonomous zone” and for threatening to use “a lawful means” to end the occupation.

Following the apology statements, admitted his weakness in enforcing the law might encourage others to follow similar acts of anarchy.

“I hope it is not an ongoing phenomenon,” Mayor Wheeler said in an article published by The Oregonian. “Our objective is to protect lives and end the occupation. And nobody should take this as an invitation to do it anywhere else. The end result could turn out very differently.”

In his New Year’s Day statement, Wheeler talks tough again, saying, “We need more accountability and we need to hold people responsible for their criminal conduct.”

The mayor said he did not understand the New Year’s Eve rioters that came at a time with others in the city focused on “hope and optimism that can come with the dawn of a new year, why would a group of largely white, young and some middle-aged men, from all reports, destroy the livelihood of other people who are struggling to get by?”

“It’s the height of selfishness,” Wheeler concluded. “There are just some people who want to watch the world burn. That’s what we’re up against here.