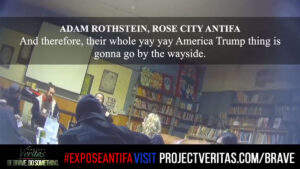 The protests for justice were hijacked by the mainstream media’s narrative, by politicians looking to score points, and by agents of anarchy. One such anarchist is Antifa. It’s meant to mean anti-fascist, but its actions show it to be a left-wing terrorist group.

CNN describes Antifa as: “A broad group of people whose political beliefs lean toward the left — often the far left — but do not conform with the Democratic Party platform.” Adding that: “Some (Antifa members) employ radical or militant tactics to get out their messages.”

On Sunday, May 31, President Trump tweeted: “The United States of America will be designating ANTIFA as a Terrorist Organization.”

This stance was taken after days of anarchy.

CNN said in the same article where they described Antifa as a “far left-leaning group who use radical and militant tactics,” that the President has no legal authority to label a domestic group terrorist because of the First Amendment.

Ironically, in the same CNN article, they state that Antifa is highly organized, but it has no central leadership, and because of it, U.S. law enforcement has been unable to deal with the group’s violence.

So, the issue isn’t the First Amendment, but that Antifa is structured like a terrorist group? No central leadership, with cells acting independently?

Amazingly, CNN ignored the fact Antifa has cells globally and has been involved in international riots. Which means the argument about the President not being able to label a domestic group as terrorist, is nonsense. They’re international, they function like terrorists, and they go beyond just verbal protesting.

Project Veritas founder and CEO James O’Keefe said: “It is a sad time in our nation’s history with Antifa activists hijacking #blacklivesmatter protests in cities across the country, attacking the police and engaging in violence.”

We know the violence was planned because palettes of bricks were left around countless cities, plus protest leaders knew where those bricks were. Additionally, those who placed the palettes knew protest routes in advance and must have been well-financed to deliver so many, so quickly.

Check out the video below:

There are two key parts of the Project Veritas video. The first: “It’s not boxing, it’s not kickboxing, it’s like destroying your enemy.” The second: “Make them feel ridiculous, make them feel outnumbered, and therefore, their whole yay yay America Trump thing is gonna go by the wayside.”

If the video is real, Antifa is out to destroy it’s enemy, which appears to be President Trump.

After the video Congressman, Matt Gaetz said on his podcast: “It’s very clear that these are not folks engaged in politics. They are engaged in terrorism. They want to gouge eyes, they want to harm, they want to disrupt. They want clearly to make a point at the edge of weaponry, and not at the tip of the tongue as political speech would dictate.”

Gabriel Nadalas, who is an alleged former member of Antifa said in an interview that the anti-fascist angle is a false narrative. He also called them the most violent group he had ever been a part of.

When asked about Antifa recruitment he said: “I think it has to do with the fact that so many college administrators and college campuses … allow Antifa to work under their noses. Campus Reform reported on a story from the University of Florida this past fall. It was an Antifa group openly recruiting in broad daylight.”

He continued: “We don’t allow ISIS to recruit on college campuses and we should not allow Antifa to do that either.”

During the interview, he states that: “Antifa pretends to be about fighting fascism, but then they define fascism as basically anything that does not conform with their radical leftist agenda; which goes back to exactly what President Trump is doing.”

Clearly, the President is right to label them terrorists and CNN needs better fact-checkers.