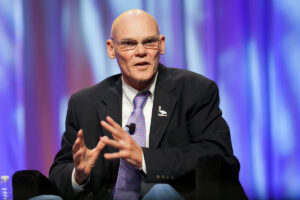 James Carville, a former lead strategist for Bill Clinton’s presidential campaign said in a wild rant that President Trump will get his “fat a** beat” in the 2020 election.

The political consultant and media contributor appeared on The Shuttering John Podcast and went into a full rant, even saying that Republicans will attempt to rig the match-up.

It was an ironic thing to say considering a Democrat pleaded guilty for taking bribes to commit voter fraud in recent headlines. The Democrat admitted to committing fraud during the Philadelphia elections in 2014, 2015, and 2016.

The podcast is hosted by John Melendez and begins with the question: “Trump is essentially — the whole administration is a snake oil salesman, correct? What’s going on here? Tell me.”

Carville rants: “What’s going on is [Trump] is going to get his *ss beat. He’s going to get his fat *ss beat. Now, the question is by how much. If we want to go through this lethargic kind of stuff and blah, blah, blah, and worry about this, we can get 290, 295 electoral votes, and will change nothing. If we go and take it to him and talk about what a massive, fat failure he is, then we can run away with this thing. The idea is not just to defeat Trump, you have to defeat Trumpism.”

It appears that, now that Nancy Pelosi called the President “morbidly obese,” everyone can fat-shame freely.

The podcast rant doesn’t end there.

2020 Election All About The Media

James Carville, who is nicknamed the “Ragin’ Cajun” co-hosted CNN’s Crossfire from 2002 to 2005, and remained a CNN contributor until 2013 when he joined Fox News.

From the left, it’s all the President’s fault. For the rest of us, the fighting has been because Democrats and the left mainstream media have relentlessly pushed a narrative where the President is called sexist, racist, and even compared to Hitler.

During the podcast he’s even compared to Hitler again.

Anyone who watches the mainstream media will know why the President discredits them. From ignoring sexual assault allegations against Joe Biden to hounding Florida’s Gov. Ron DeSantis because the truth didn’t fit their narrative.

CHECK OUT: Biden calls out President Trump for turning back on world and putting America first during pandemic.

During the podcast James Carville revealed what his strategy for Joe Biden’s 2020 Election campaign would be, and it’s effectively to hide behind a lie and pray on weak Republicans and independents.

There’s no irony either, especially considering the podcast begins with the accusation that President Trump’s whole administration are snake oil salesmen.

Carville said: “What I’d do is just be Joe Biden, and just give people a sense of change. The best word in the political language is change. It can mean anything you want it to mean.”

Isn’t that the definition of a snake oil salesman?

He concludes: “We’ve got to win by a lot. These left-wingers will say he (Biden) hasn’t moved far enough on this. He’s got one job: win the election, then move where ever you want to.”

That’s right, win promising change and then do whatever you like. Classy. Watch the full podcast video below.