President Trump: “I Have A Chance To Break The Deep State” 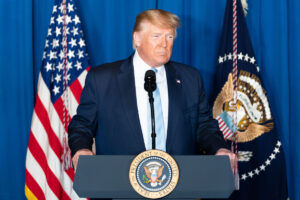 Whether you believe in the deep state or not, President Trump does, and in a recent interview he stated that he has a chance to break it.

In the interview with Sharyl Attkisson the President said: “I have a chance to break the deep state. It’s a vicious group of people. It’s very bad for our country.”

WHAT IS THE DEEP STATE: A collection of influential people in government, the military, and across agencies that secretly pull the strings, manipulating policy and directing the country regardless of democracy.

The President has been in office since 2017, and his pre-2016 election promise was to drain the swamp, also known as getting rid of the deep state. So far, this has not been achieved. So the question has to be asked, why does the President have a chance to break the deep state now, after years of inaction?

The simple answer is, people weren’t doing their jobs before.

In the interview, the President said: “Dan Coats didn’t do his job” and that “Jeff Sessions was a disaster as Attorney General.”

Dan Coats was the President’s Director of Intelligence.

In contrast, President Trump praised Richard Grenell, the now former-acting Director of Intelligence, saying that Grenell did more in eight-weeks than what Coats and Sessions did in two-and-a-half years.

Grenell, who in April declassified a Justice Department report that proved the FBI had evidence in 2017 that Russian operatives had spread misinformation about the election, which ultimately led to the impeachment hearing in 2020. Grenell was also responsible for declassifying the list of former-President Obama administration officials who had requested intelligence reports on Michael Flynn.

Considering what Richard Grenell declassified, including the FBI notes that clearly show a conspiracy against former United States National Security Advisor General Michael Flynn, the President’s optimism could be understood. In Grenell, he finally had someone brave enough to stand up for the United States.

However, from May 26, Texas Rep. John Ratcliffe takes over from Grenell as Director of Intelligence and despite the President saying Ratcliffe is “fantastic” during the interview, we’re left hoping he is as good as Grenell.

During the interview the President also said other things are going to come out and called former FBI Director James Comey a “dirty cop,” and former FBI Deputy Director Andrew McCabe a “bad guy.”

The declassified FBI notes read: “What is our goal? Truth/Admission or to get him to lie, so we can prosecute him or get him fired?”

If the FBI conspired against the administration and Gen. Flynn, anything is possible. Even a deep state that’s pulling the strings behind the scenes.