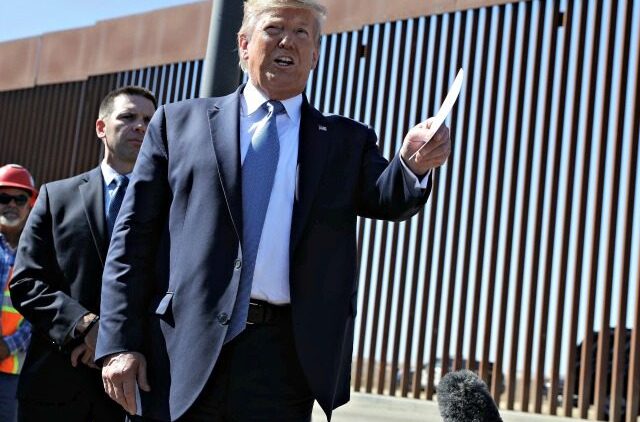 President Donald Trump has extended his national border emergency until February 2022, giving President-elect Joe Biden a helping hand to offset the growing number of migrants heading toward the southern border of the United States.

“The ongoing border security and humanitarian crisis at the southern border of the United States continues to threaten our national security, including by exacerbating the effect of the pandemic caused by COVID-19 … but further action is needed to address the humanitarian crisis and to control unlawful migration and the flow of narcotics and criminals across the southern border of the United States,” said Trump’s January 16 announcement of the emergency extension.

The extension continues the emergency he announced in February 2019 to overcome the GOP and Democratic opposition to his border wall and migration reforms.

Since then, Trump deputies have completed more than 450 miles of border wall — and a series of irreplaceable legal reforms that give border officials the ability to quickly repatriate people who get over the wall.

Five million Central American residents want to migrate into the United States, according to a Gallup survey published right after the 2018 midterm elections.

Cotton’s warnings were echoed by Mark Morgan, the outgoing acting commissioner of the Customs and Border Protection force:

The dramatic images — and the potential damage to Americans’ jobs and wages if the migrants get to the United States — were dismissed as non-news by corporate-backed advocates for mass migration:

Many polls show that cheap labor migration is deeply unpopular because Americans know that it is used by companies to displace Americans and to cut their wages.

Economists recognize that migration moves money from employees to employers, from families to investors, from young to old, from children to their parents, from homebuyers to real estate investors, and from the heartland states to the coastal states that are home to many investors and Democratic donors.

That establishment-backed economic transfer has shriveled the wealth and health of many red states, prompting many voters to help Donald Trump defeat the GOP establishment in 2016. Trump’s partly successful effort to reverse that drain boosted his 2020 support among working-class whites, blacks, and Latinos.

The American public’s multiracial, cross-sex, nonracist, class-based opposition to cheap-labor migration coexists with generally favorable personal feelings toward legal immigrants and toward immigration in theory — despite the media magnification of many skewed polls and articles that still push the 1950’s “Nation of Immigrants” claim.