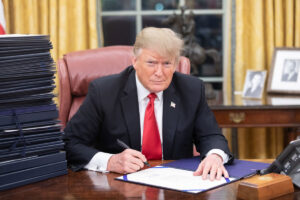 In a fiery four-page letter to the Director-General of the World Health Organization (W.H.O), President Trump demonstrated how he puts America first.

What the President wrote went far beyond the usual strongly worded letter we’ve come to expect in political situations. In this letter, there’s no holding back and every accusation against the W.H.O is put down, including an ultimatum at the end.

Covering up the origin:

CHECK OUT: Governor can’t pay first responders but has millions for illegal aliens.

It concludes by giving the W.H.O 30 days to prove its independence from China or the temporary freeze of funds from the United States will become permanent.

The President’s final line in the letter sums up our leader perfectly: “I cannot allow American taxpayer dollars to continue to finance an organization that, in its present state, is so clearly not serving America’s interests.”