Progressive Mayor Against Building The Wall, Puts Up A Wall Around City Hall 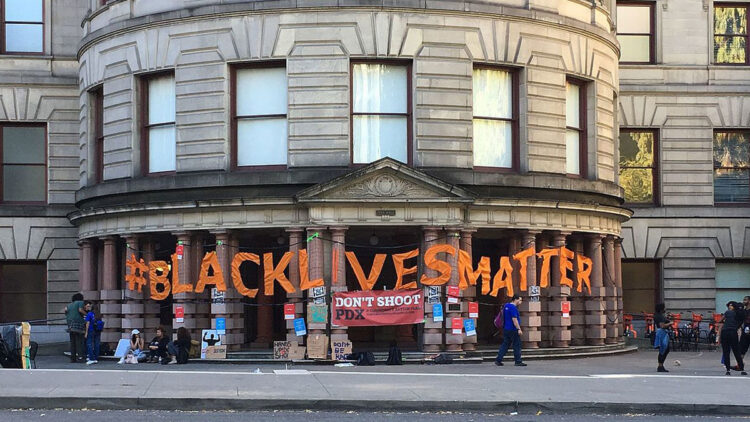 Ironically in 2020, he is the one building walls, two in-fact. Both of which erected around city buildings so that they are protected from vandalism done by Black Lives Matter supporters, who are an anti-racism activist group.

These wooden walls aren’t the first. They are being put up to replace the previous fencing that did not stop the protestors from putting their mark on City Hall and the Portland Building.

The Mayor’s office told the Portland Tribune: “Cleaning the buildings each day is taking public resources, particularly due to the limestone surface at City Hall. We are looking into the possibility of partnering with the arts community to create murals on the plywood in support of the racial justice movement.”

Letting Activists Get Away With It

There is no dispute, it is a fair reason to erect walls. If the walls can keep costs down, along with people and property safe, they should be erected. Although, drawing a line for protestors not to cross, like stopping graffiti, might also prevent Portland from again falling to Antifa rule. Like what happened in 2018, and like what is happening now in Seattle.

Yet, because of Mayor Wheeler’s speech in 2019, this turn of events makes him look like a hypocrite. You can’t say: “Let’s build bridges, not walls. Work together, not against each other,” and expect no comeback when you start to build walls to defy racially motivated graffiti.

The Mayor said in his speech: “The reality is that we’re living at a time, where at the federal level we have an administration that’s seeking to build a wall to divide us,” and “I will say it, Pastor, because I agree, you can’t say it, but I’m going to say it, we have a President who emboldens racist behavior.”

From the perspective of keeping people and property protected, surely the walls and fences being put up by the President and Mayor share some common purposes?

CHECK OUT: The New York Times admits the mainstream media doesn’t care about Conservative views, and tell the news from their own perspectives.

Perhaps President Trump should offer to paint a giant mural on the U.S. Mexico border wall that shows unity. That way it would be 100-percent the same, in principle and purpose, as what Mayor Wheeler is doing and describing via the Portland Tribune.

They both protect people and property, plus the walls in Portland are to stop the cost to clear graffiti, just like the border wall is an attempt to reduce the huge outlay spent protecting the country from unlawful immigration. A total of $324 billion has been spent since 2003.

One Twitter user wrote: “I thought walls were bad?? Guess things change when it’s a bit closer to home.”

The protests in Portland have been ongoing for 11 nights straight and those involved have vandalized the Justice Center, Mark O. Hatfield U.S. Courthouse, and Pioneer Place. So it looks like the Portland arts community is going to be busy with painting fences for a while.

CHECK OUT: Joe Biden says between 33-million and 49-million Americans aren’t very good people. Yet in the same speech, he says the President is dividing the nation.