Five politicians that define the need for term limits 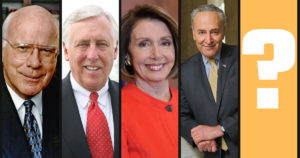 This nation needs shorter term limits for its politicians.

There’s no doubt, for some politicians it’s a vocation, a calling to do good but for most, it’s simply a job they’re born into. The problem with both is that politicians are allowed to stick around for far too long.

A lifer, when it comes to politics is bad news. If you can’t serve and do good in a few years, you’re never going to do good.

To drain the swamp we only have to look at the politicians who have not only lived politics for decades, but who have turned The White House into the madhouse.

These five Democrats have “served” this nation too long and should be taken to that special farm, where they can live out away from decisions that impact us all.

CHECK OUT: The Daily Rant, featuring the President’s media blast over the fire Fauci tweets.

Patrick Leahy, is currently serving his eighth six-year term in office. He was first elected in 1974 after President Nixon’s Watergate scandal and resignation.

That career should have ended when he leaked a classified Iran-Contra report back in 1987, but the Vermont born Grateful Dead fan “stepped down” from the Senate Intelligence Committee. Punishments clearly work differently for politicians.

In 2001, Leahy was one of two Senators targeted in anthrax attacks that tragically took five lives. The Vermont senator received the title of President Pro Tempore Emeritus in 2015 and at 80, is still finding the energy to blast President Trump.

Chuck Schummer, the man who once said Israel should strangle Palestinians economically has been winning elections in New York since 1980. He’s now 69 and has been in office for 39 years.

The once wannabe organic chemist picked law, passed the New York bar exam in 1975 and never ever practiced professionally. Clearly, Schummer was a career politician from day one.

He “served” as the congressman for Brooklyn and Queens for 18 years, then became a Senator and stuck. In more recent news, the President sent Schummer a letter, thanking him for “incorrect sound bites, which are wrong in every way.”

CHECK OUT: FDA play roulette with risky antibody tests that have never been used on a person.

Steny Hoyer has been in politics since 1962, where he worked as a staffer for Senator Daniel Brewster. Another staffer under Brewster was Nancy Pelosi.

During Hoyer’s career, he has been Vice President of the Young Democrats of America (1969-1971), words that leave a sour taste when reading out loud. Plus, he was appointed to the board of Maryland’s Higher Education (1978-1981). Politics and education shouldn’t mix.

Nancy Pelosi has a playbook for getting the mainstream media’s attention, but the 80-year-old Democrat overplayed her hand. Her pompous ceremony over the President’s impeachment trial clearly distracted a nation from a pandemic, sadly costing lives.

Pelosi is from a political family. Her father, Tommy D’Alesandro, was a Democratic congressman and the Mayor of Baltimore. It’s reported that she learned everything from her father. Allegedly as a child, she was “in charge of the book where her father kept track of favors done and owed.”

Considering Pelosi has raised $100 million for her party, that book seems like it’s still in use.

CHECK OUT: Pelosi pushes blame on President again, calling his actions “Almost Sinful” in the process.

Alexandria Oscasio-Cortez, also known as AOC was born in 1989 and is the youngest woman to serve in the United States Congress.

She is also a member of the Democratic Socialists of America, has tantrums like a child, and is getting her own action figure.

AOC, who talks about caring for Americans, chased off Amazon’s plan to open a second headquarters in Queens. Stopping 25,000 jobs in the process.

Considering AOC, perhaps one-year should be the term limit?

CHECK OUT: The Daily Rant with Steve Sanchez, on the show he asks whether COVID-19 decisions are the hardest the President has ever made?