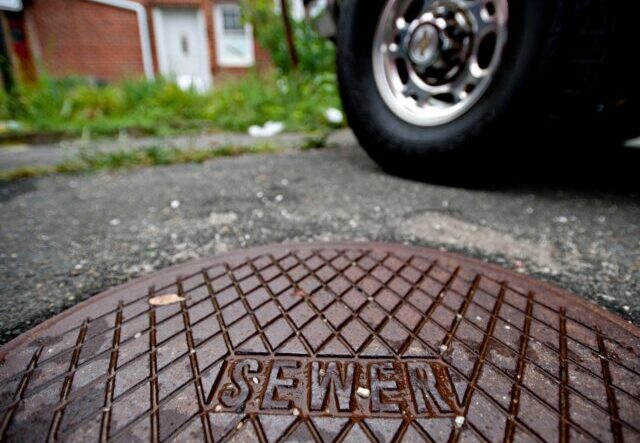 A manhole cover marked "Sewer", which is actually the cover a private cesspool of a business on Main Street in Southampton, NY Aug 13, 2009. Southampton Village Mayor Mark Epley is pushing for the installation of a sewer system in the business district of Southampton Village, which he hopes will encourage growth. (Photo by Gordon M. Grant)

“The risk to New Yorkers is real but the defense is so simple — get vaccinated against polio,” New York City Health Commissioner Dr. Ashwin Vasan said. “With polio circulating in our communities there is simply nothing more essential than vaccinating our children to protect them from this virus, and if you’re an unvaccinated or incompletely vaccinated adult, please choose now to get the vaccine. Polio is entirely preventable and its reappearance should be a call to action for all of us.”

Dr. Vasan’s remarks come after New York state Health Commissioner Dr. Mary Bassett warned that a polio case detected in Rockland County may be the “tip of the iceberg,” adding that hundreds more could also be infected.
“Based on earlier polio outbreaks, New Yorkers should know that for every one case of paralytic polio observed, there may be hundreds of other people infected,” Dr. Bassett said last Thursday. “Coupled with the latest wastewater findings, the Department is treating the single case of polio as just the tip of the iceberg of much greater potential spread. As we learn more, what we do know is clear: the danger of polio is present in New York today.”

“We must meet this moment by ensuring that adults, including pregnant people, and young children by 2 months of age are up to date with their immunization – the safe protection against this debilitating virus that every New Yorker needs,” the public health official added.

In late July, a case of polio was confirmed in Rockland County–the first case in the United States since 2013.

The 20-year-old patient was unvaccinated against the virus, officials said. The individual traveled to Europe–Poland and Hungary–and was hospitalized in June, according to The Washington Post.

Polio infections usually occur via the mouth or saliva and could spread without visible symptoms, which are typically flu-like.