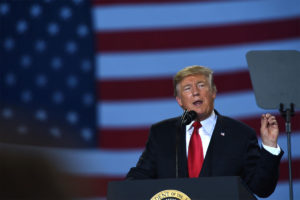 A letter addressed to Education Secretary Betsy DeVos reads: “These students should not be excluded from critical emergency financial aid. Indeed, those who are especially vulnerable to economic hardship are exactly whom these funds were designed to help.”

The letter even includes a statement that literally demands the decision be reversed: “We expect you to comply with the intent of the CARES Act and reverse this unauthorized decision immediately.”

What’s unsurprising is that the Senators are specifically requesting funds to be made available for students enrolled in the Deferred Action for Childhood Arrivals (DACA) program. A program the White House has been trying to terminate since 2017.

CHECK OUT: Meat will disappear from grocery store shelves if the lockdown doesn’t end.

DACA was an Obama-era policy that allowed the children of immigrants to remain in the United States if under-16 when they arrived.

The President has been trying to terminate the program because of a memo delivered in 2017 that said: DACA is unconstitutional and that the administration should, therefore, end the program or else risk lawsuits challenging it on that basis.

Lower courts have kept the program alive since 2017, but the 670,000 enrolled in DACA are now waiting for the Supreme Court to make a decision on the program’s future.

CHECK OUT: New York Mayor asked whether he’s using this crisis to take the city into socialism.

Democratic lawmakers continue to put the government under pressure to provide COVID-19 relief money set aside for Americans to those who are illegally in the United States.

Most recently, fifty Democrats gave their support to the Leave No Taxpayer Behind Act. An act which if passed into law would give illegal aliens access to relief funds in the CARES Act.

Gov. Gavin Newsom has already put $125-million to one side for the 150,000 illegal adults living in California and has previously set aside more funds for undocumented immigrants running businesses.

CHECK OUT: Whistleblower doctors says that the lockdown will weaken immune systems.