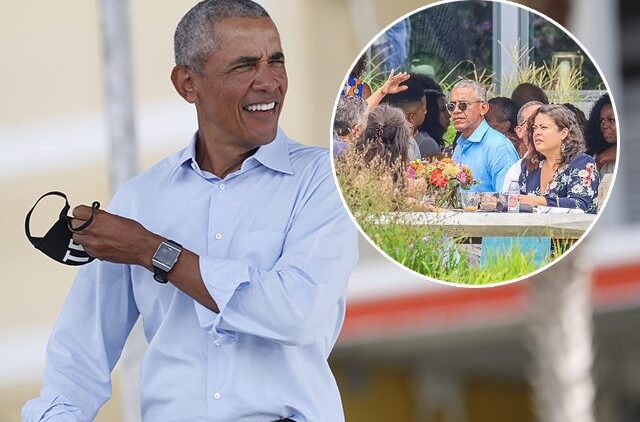 Former President Barack Obama reportedly continued to celebrate his 60th birthday Sunday with a brunch gathering of his friends at a restaurant in Martha’s Vineyard, marking the third straight day of pandemic partying for the Obamas.

The Sunday brunch took place at a waterfront restaurant, with photographs showing Barack and Michelle Obama seated amid a crowd of friends, none of whom could be seen wearing masks as they socialized in close proximity, according to a report from the Daily Mail.

The Obamas and their friends appeared to be seated in a partially enclosed tent area just a short distance from the water.

In the days leading up to Saturday’s main birthday celebration, the former first couple received a deluge of criticism for bringing together hundreds of attendees while Americans elsewhere are being told to continue exercising caution due to the spread of the coronavirus Delta variant.

The Obamas responded by promising to scale back the celebration from their initial plans of more than 400 guests. But published reports revealed that Saturday’s celebration still drew a large crowd, with video showing attendees socializing indoors without masks.

The Daily Mail reported one staffer estimated 300 to 400 people were in attendance.

Among the celebrities who reportedly showed up to Saturday’s bash were Tom Hanks and Rita Wilson; Steven Spielberg; Chrissy Teigen and John Legend; Gabrielle Union and Dwayne Wade; and Don Cheadle. Pop stars Erykah Baydu and H.E.R. also put in an appearance.

The Obamas reportedly kicked off the birthday festivities on Friday, with a pre-party cocktail party at Winnetu Oceanside Resort, an upscale Martha’s Vineyard getaway.