Report: Biden will ‘exorcise any trace of Team Trump’ in White House after inauguration 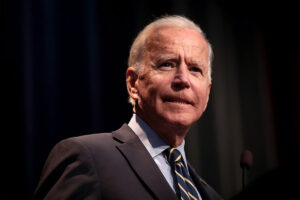 Team Joe Biden plans to purge any trace of President Donald Trump and the Trump administration from the White House upon Biden’s impending inauguration next month. POLL: Would you take the COVID-19 vaccine?

According to the Daily Mail, media-declared president-elect Joe Biden is “insisting” that the 55,000 square feet that sit atop 1600 Pennsylvania Avenue are “thoroughly disinfected” prior to the Biden family moving into the residence.

The report said that a cleaning team will wear hazmat suits to clean the property upon Trump’s departure. The cleaners will disinfect the entire property, which will reportedly include removing furniture and even carpets.

“There is a five-hour window between presidents. That’s when 95 staff will have to pack up all the Trump possessions and move the Bidens in. They will clean or replace everything,” White House historian Kate Andersen Brower said, the Daily Mail reported. “The incoming president and first lady get to choose their new furniture from a secret warehouse.”

A Biden transition team member told the Daily Mail that the rigorous cleaning will be, in part, a response to what they consider a haphazard response by Trump to the coronavirus.

In fact, the official said the White House residence and executive office will be cleaned so thoroughly that any trace of Trump will be removed.

“Mr Trump’s administration has been riddled with the coronavirus. The Bidens are taking no chances. The entire property will be deep-cleaned down to replacing doorknobs and taking down soft furnishings. The virus can linger on hard surfaces so the entire residence and executive offices will be wiped clean with disinfectant to exorcise any trace of Team Trump,” the Biden team member told the Daily Mail.

The report came as news broke that White House staffers and senior members of the government would be among the first recipients of the COVID-19 vaccine.

White House staff members who work in close quarters with President Trump have been told they are scheduled to receive injections of the coronavirus vaccine soon, at a time when the first doses of the vaccine are being distributed only to high-risk health care workers, according to two sources familiar with the distribution plans.

The goal of distributing the vaccine inside the West Wing is to prevent additional government officials from falling ill in the final weeks of the Trump administration. The hope is to eventually distribute the vaccine to everyone who works in the White House, but will begin with some of the most senior people who work around the president, one of the people said.

The first shipment of Pfizer’s vaccine was dispersed Sunday morning, sending millions of vaccine doses across the country.