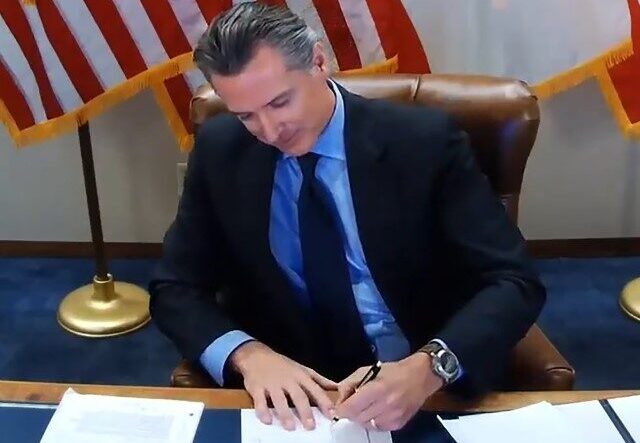 “This month alone, Gov. Gavin Newsom has signed into law more than 10 new firearm restrictions. These include fresh limits on gun advertising to minors; increased inspections of dealers; and a 10-year ban on firearm possession for those convicted of child abuse or elder abuse,” the report notes.

The Times adds that the most recent restriction signed by Newsom, the one that allows “Californians to sue anyone who distributes banned assault weapons or ghost guns,” was signed Friday.

Breitbart News reported Newsom’s signing of the law Friday, noting FOX News’ observation that the law is modeled after a Texas law that allows private citizens to “sue physicians, drivers or anyone else who aids a woman in receiving an abortion for $10,000.”

Newsom’s office tweeted, “California will be the first state to allow individuals to sue those spreading illegal assault weapons and ghost guns. If states like Texas can use laws to put women in harm’s way, then California will use that authority to protect lives.”

On Sunday, two days after Newsom signed the latest gun control bill, at least three people were shot in an attack at a car show in San Pedro, California.

A shooting on Sunday, July 24, 2022, at Peck Park in San Pedro, California, left two people dead and several injured. Blood can be seen on the street entrance to the park along with yellow police tape. (Carolyn Cole / Los Angeles Times via Getty Images)

CBS News observed seven victims were injured in total, at least three of whom are shooting victims. Two of the gunshot victims, a man and a woman, were transported to the hospital in critical condition.