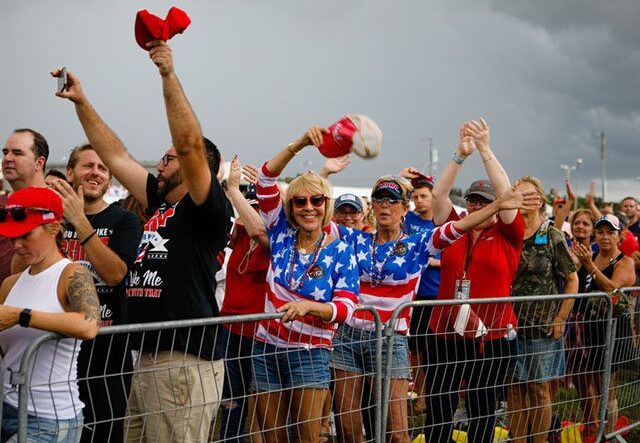 More than one million voters across 43 states have switched to the Republican Party in the past 12 months alone, ballot intentions compiled by the Associated Press (AP) shows.l

A broad swathe of  regions in the country – big and small, urban and rural – report the same phenomenon.

Nowhere is the switch more visible, according to AP analysis, than in suburban counties stretching across Denver to Atlanta, Pittsburgh and Cleveland.

All the numbers bode ill for Democrats in a vote which will determine control of Congress and dozens of governorships.

In all roughly two-thirds of the 1.7 million voters who changed their party affiliation shifted to the Republican Party. That amounts to more than one million people who became Republicans compared to about 630,000 who became Democrats.

A lack of direction by the Democratic Party is contributing to its slide. The AP report states:

Roughly four months before Election Day, Democrats have no clear strategy to address Biden’s weak popularity and voters’ overwhelming fear that the country is headed in the wrong direction with their party in charge. And while Republicans have offered few policy solutions of their own, the GOP has been working effectively to capitalize on the Democrats’ shortcomings.

“Biden and Democrats are woefully out of touch with the American people, and that’s why voters are flocking to the Republican Party in droves,” RNC Chair Ronna McDaniel told AP. She predicted that “American suburbs will trend red for cycles to come” because of “Biden’s gas hike, the open border crisis, baby formula shortage and rising crime.”

This is not the first time Democrats have been warned of a voting catastrophe awaiting in this year’s midterms.

As Breitbart News reported last month, the Democrats are “in shellacking territory.”https://cd72897c70b014a84e644f2b70b888b1.safeframe.googlesyndication.com/safeframe/1-0-38/html/container.html0 seconds of 2 minutes, 45 secondsVolume 90%

President Joe Biden is in no better personal territory.

The president is underwater on almost every key issue as the midterm elections loom closer, a Redfield & Wilton Strategies survey reported by Breitbart News reveals.

That gives him a net negative approval of -8 percent. Even so, that is still far better than his current RealClearPolitics spread, which sits at -15.1 as of last Monday.

Even as voters turn away from the Democrats and look on Biden with increasing disdain, AP reports the broad migration of more than one million voters, a small portion of the overall U.S. electorate, does not ensure widespread Republican success in the November midterm elections.

The details about party switchers however does present a dire warning for Democrats.

Put simply, the public isn’t buying what the Democratic Party is selling.