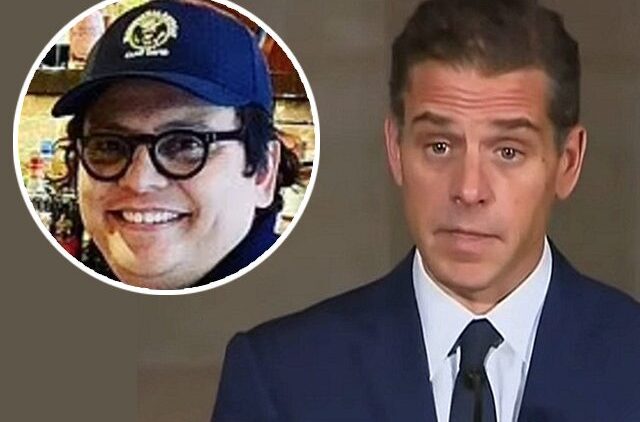 Hunter Biden’s art dealer Georges Bergès was pictured Thursday wearing a Camp David hat. It is unknown how Bergès obtained the hat or if he traveled to Camp David with the president, who most recently visited the country estate during the collapse of Afghanistan.

The photo of Bergès wearing the presidential hat was posted to Instagram days before Hunter’s latest art show over the weekend by gossip columnist George Wayne, who alleges he introduced Hunter to Bergès.

“GB shows up wearing a fabulous cap emblazoned with the Presidential seal and the words Camp David Presidential Retreat 46 all over it,” Wayne wrote. “Say whaaa? Were you at Camp David last weekend with your artist Hunter Biden???!!!”

Wayne’s post seemed to reveal for the first time that Hunter and Bergès were planning a secret art exhibit in SoHo, New York City, this past weekend, where the two were attempting to sell Hunter’s paintings for up to $500,000. At Hunter’s last exhibition in Los Angeles, five paintings worth $75,000 each were reportedly sold to an anonymous buyer.

“When the arbiter conducted further reconnaissance and swanned by your gallery this afternoon there was a gaggle of paparazzi outside?!! And the gallery windows on West Broadway smothered with brown paper?!!,” the social media post continued. “What’s going on at the GBG [Georges Bergès Gallery]?! Is Hunter Biden’s much discussed solo show about to land in Gotham City??!!”

Hunter’s second art show in SoHo was initially reported to be delayed until spring. The secret show in SoHo was ultimately held this past weekend, despite challenges of “legal vetting” of guests willing to spend hundreds of thousands of dollars on art.

The president’s son has come under fire for selling his artwork while reportedly maintaining an interest in an entity Skaneateles, which is said to have “access to tens or hundreds of millions of dollars for Chinese and global investments and set up a complicated web of China-based and Cayman Island shell companies and subsidiaries.” Such a financial web could be utilized to launder money around the world, such as from Hunter’s painting ventures, without United States officials’ knowledge.

Hunter’s art dealer, Georges Bergès, has previously boasted his strong ties to businessmen in Communist China, which has concerned many due to the Biden family’s business ventures abroad. Breitbart News reported:

Hunter’s past work as his father served as vice president — striking deals with Chinese officials and raking in tens of thousands of dollars per month serving on the board of Burisma, a Ukrainian oligarch-owned oil and gas company, despite having no experience in the energy sector. His father would later brag about threatening to withhold aid from Ukraine unless officials fired the prosecutor conducting a corruption investigation into Burisma.

White House press secretary Jen Psaki has defended Hunter’s art scheme and his contact with potential “anonymous” art buyers as “reasonable, suggesting Hunter “is not involved in the sale or discussions about the sale of his art,” and that Hunter will not be “informed” of “who is purchasing his art.”