Report: National Guard Could Stay in D.C. Until Fall 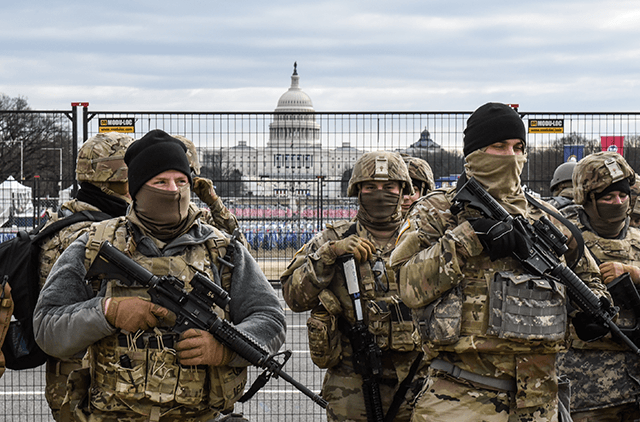 National Guard members might still be deployed to the nation’s capital through the fall of 2021, according to a recent report.

According to the exclusive report by FOX 5’s Sierra Fox:

The National Security Council is asking the Department of Defense to engage Capitol Police on planning for post-March 12th support, according to the e-mail.

According to the report, there is a scheduled meeting for the agencies to discuss the presence on Wednesday, February 17.

The email, according to FOX 5, was from Robert Salesses who began Performing the Duties of the Assistant Secretary of Defense for Homeland Defense and Global Security on January 20, 2021. It said:

If it’s not possible to sustain at the current level with [National Guard] personnel, we need to establish the number of NG personnel (DCNG and out-of-state) we can sustain for an extended period – at least through Fall 2021 – and understand additional options for providing DoD support, to include use of reserve personnel, as well as active component.

There are currently 6,061 National Guard members who are in the capital supporting the Capitol Police, according to the Pentagon on Friday. That number is scheduled to reduce to 5,000 by mid-March, but it is not clear how long the mission will last beyond that.

The Pentagon last week confirmed that the American taxpayer cost of the deployment of National Guard forces to the Capitol is an estimated $483 million through mid-March. It is not clear when the mission will end or what the final costs will be.

The National Guard mission to protect the Capitol building began on January 6 after some pro-Trump supporters broke into the building or engaged in violence with police. The Pentagon authorized 7,000 National Guard forces that day. After that, federal and local authorities requested more than 26,000 National Guard members to secure the January 20 inauguration. The number was slated to drop to 7,000 at the end of February and further down to 5,000 by mid-March.

FOX 5 reported that during a virtual town hall on Thursday, Delegate Eleanor Holmes Norton was asked by D.C. residents how long the National Guard would stay in D.C. and how long fencing around the Capitol would stay up, but no straight answers were given.

When queried, the Pentagon provided a National Guard statement to Breitbart News on Saturday:

The National Guard is currently supporting federal agencies through mid-March. We are providing assistance such as security, communications, medical evacuation, logistics, and safety support to state, district and federal agencies. There are still approximately 6,000 personnel on duty. For additional requirement information, we would refer you to the requesting agencies.

Supported Agencies and type of support are as follows: