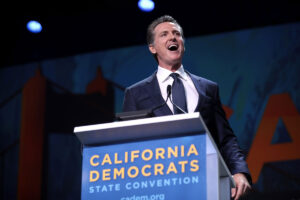 May 8, California Gov. Gavin Newsom signed an order that sent every registered voter in the state a vote-by-mail ballot for the 2020 election in November.

The Republicans, who are suing the Governor and his Secretary of State Alex Padilla, claim that: “In a direct usurpation of the legislature’s authority, Governor Newsom issued an executive order purporting to rewrite the entire election code for the November 2020 election. This brazen power grab was not authorized by state law and violates both the Elections Clause and Electors Clause of the U.S.”

Simply put, Newsom didn’t have the power to do what he did.

The RNC and RNCC aren’t alone in suing the Governor and Secretary of State, former Rep. Darrell Issa is doing the same via Judicial Watch. A Conservative group that investigates misconduct by government officials.

In a statement, Tom Fitton, the President of Judicial Watch said: “California law prohibits blindly mailing out ballots to every registered voter in the state. This scheme raises the risk of Election Day chaos as well as voter fraud.”

The concern is clearly that ballots sent out can be used by any and all to influence the voting during the 2020 election. It’s a valid concern considering a Democrat election judge recently pleaded guilty to voter fraud in 2014, 2015, and 2016. If people cannot believe their vote counts then democracy is lost.

In the RNC and RNCC case file, section three reads: “The Governor created a system that will violate eligible citizens’ right to vote. By ordering that vote-by-mail ballots be automatically sent to every registered voter—including inactive voters, voters with invalid registrations, voters who have moved, voters who have died, and voters who don’t want a ballot—he has created a recipe for disaster. No State that regularly conducts statewide all-mail elections automatically mails ballots to inactive voters because it invites fraud, coercion, theft, and otherwise illegitimate voting. Fraudulent and invalid votes dilute the votes of honest citizens and deprive them of their right to vote in violation of the Fourteenth Amendment.”

What’s most bizarre about this whole scenario is that Gov. Gavin Newsom has issued this executive order now as states are gradually reopening and while the nation is still five months away from the 2020 election. A lot could change between now and then.

CHECK OUT: Doctor says suicide numbers are unprecedented since the coronavirus lockdown started.

In 2005 a report titled Building Confidence in U.S. Elections stated that absentee ballots were the biggest issue when it comes to voter fraud. It reads: ‘These risks are compounded by the practice of ballot harvesting—that is, coordinated efforts to have third parties collect absentee ballots from voters and drop them off at polling places or elections centers.”

The report also states that one in eight voter registrations nationwide is inaccurate. This could mean a vote-by-mail system with legalized ballot harvesting has the potential to completely fix the 2020 election regardless of people’s actual votes.

When announcing the lawsuit, GOP Chairwoman Ronna McDaniel tweeted: “I am pleased to announce that the RNC, NRCC & CAGOP just sued Gavin Newsom over his illegal election power grab. His radical plan is a recipe for disaster that would create more opportunities for fraud & destroy the confidence Californians deserve to have in their elections.”

One thing is certain, 2020 election ballots need to be protected.

CHECK OUT: Joe Biden says young black man is not black because he doesn’t know who to vote for in 2020 election.