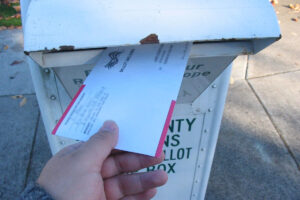 It was a big night for Republicans in Wisconsin and California special elections. There was one outright winner and another that took a huge lead heading into the final count.

The Republican beat Democrat hopeful Tricia Zunker in the special election and will take the vacant seat, which was held by former reality TV star (The Real World Boston) and sports commentator Sean Duffy.

Duffy retired for family reasons back in September 2019.

The President tweeted: “Big News: Tom Tiffany of the Great State of Wisconsin has just become Congressman Tom Tiffany. He will do a FANTASTIC job for the people of Wisconsin, and the United States. Congratulations!”

Tom Tiffany was proud of his victory and said: “Any time you lose by 14 points, I don’t think that’s a moral victory. This is a decisive victory here.”

Anna Kelly, a President Trump campaign spokesperson said: “Tonight was a win for President Trump and Tom Tiffany that demonstrates the enthusiasm behind our president across Wisconsin.”

The truth is, Wisconsin is an important state for President Trump’s re-election hopes and this victory is a step in the right direction, despite Democrat Tricia Zunker’s claim that this race “laid the groundwork for this seat to turn blue in November.”

In California, there’s a race to take the seat of disgraced Democrat Katie Hill, who resigned in October 2019 after nude photos of her were leaked. Later she was accused of having an affair with a congressional staffer, which she denied.

CALIFORNIA: Early numbers show that Republican Mike Garcia is ahead of Democrat Christy Smith by 12 percentage points. This is after 76-percent of precincts have already been reported.

The final ballots, which must be postmarked by Tuesday will be received and counted by the end-of-day Friday. At which point the 25th Congressional District race for a House seat in the Los Angeles suburbs will be settled.

Yet, unless there’s a big momentum change, the race looks already won.

If Mike Garcia, a defense industry executive, does win, it will be the first time since 1998 that a blue California Congressional District has turned red.

CHECK OUT: Survival rate by age if you get COVID-19.