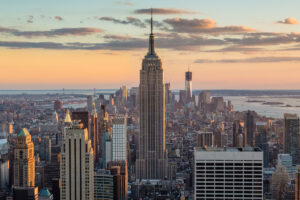 According to the New York Times, the wealthy escaped the city as COVID-19 spread in March and April.

Sixty-percent of those who are in the top one-percent of income in New York City fled. In comparison, from the bottom eighty-percent, only seven-percent did the same.

The New York Times calculation is based on U.S. Post Office data. In March, 56,000 households requested mail-forwarding. This is twice the amount they normally have requested. In April, the number of requests increased further to 81,000.

From the new requests, sixty-percent were for destinations outside the city. The bigger picture is that, not everyone fleeing intends on returning.

CHECK OUT: The police tackled a mother as if armed and dangerous after an altercation over not wearing a mask correctly. Plus, images show police aren’t following the rules they’re enforcing.

New York City has been hit hard by the pandemic, likely because of its high population density. Nearly 200,000 have tested positive at the time of writing, and those financially capable who wanted to leave, have done so.

It’s impossible to predict whether those escaping will return, yet sales and rentals show that high-end homes outside of the city are in high demand.

Owen Berkowitz, a broker who serves high-end markets like Westchester and Fairfield County, said: “I can’t remember the last time we were this busy.”

According to brokers, there’s a rush of buyers seeking more space and distance from crowds. Whether these become temporary escapes or long term permanent homes, no one knows right now but the exodus from the city is real.

Steven Magnuson, a broker in Greenwich said: “It seems like everyone wants to leave the city. Our problem is not enough inventory for sale. We’ve been on the phone 24/7 and on email.”

Those who went further than New York’s suburbs headed to Florida, where Gov. Ron DeSantis quarantined them. Measures included setting up checkpoints and announcing an executive order forcing those fleeing New York to quarantine for 14-days.

Gov. DeSantis said: “I think it’s in everybody’s interest that we deal with the spread that we have here now, try to blunt it, flatten the curve, but we don’t allow importing new infections.”

The fear that fleeing New Yorkers would spread the virus was real. So much so the President considered quarantining the city. He told reporters: “We might not have to do it but there’s a possibility that sometime today we’ll do a quarantine — short-term, two weeks for New York, probably New Jersey, certain parts of Connecticut.”

Once again, proving the President has been listening to the medical advise.

CHECK OUT: Joe Biden is the second most reviled in the eyes of Secret Service agents because of his naked swimming.