States Have Every Right to Forcibly Administer Vaccines 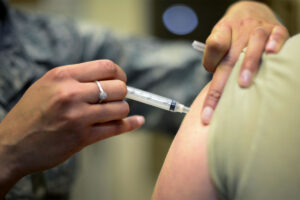 According to a well-respected liberal Democratic lawyer, who is famed amongst Republicans for defending the President during the attempted impeachment, the government has the right to forcibly administer vaccines.

Alan Dershowitz, the Harvard Law School emeritus professor made it clear that the U.S. Constitution gives the government the option to forcibly vaccinate its citizens to stop the spread of contagion if it endangers the public.

CHECK OUT: President Trump slams W.H.O in brutal letter that points out countless reasons for why funding was stopped.

He continued: “If you refuse to be vaccinated, the state has the power to literally take you to a doctor’s office and plunge a needle into your arm.”

This means, for every contagious disease that endangers the public, the government could have forced a vaccine. Which poses the question, how is it that parents can refuse vaccinations for their children?

The long held belief is that the Constitution protects us from draconian governments but it actually protects democracy.

The one caveat is that, the government should give an alternative to the vaccination. Remain in lockdown or be vaccinated…

Dershowitz stated: “They should give you an alternative. The alternative is to live in your home, don’t get vaccinated, but never ever leave your home or live in a bubble. But if you want to interact with other people, you cannot become Typhoid Mary. The Constitution doesn’t give you the right to spread your illness to other people.”

Watch the full interview between Alan Dershowitz and Jason Goodman below: