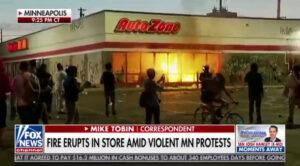 What started as a planned protest seeking justice for George Floyd, a man brutally killed by a police officer on May 25, quickly became a dangerous riot ending in looting, burnt buildings, and violence.

Karen Scullin of Fox9 reported that the 3rd Precinct had windows broken and that a citizen was attacked who owned a vehicle that had a President Trump sticker. The car was smashed up and the driver punched several times before escaping.

Scullin tweeted: “A sad sad situation at the 3rd precinct. The anger and violence. People now hurt. The 3rd precinct smashed up everywhere.”

The riot continued to escalate and Target was next on their list. Looters stole electrical items, clothing, and much more.

Scullin wrote: “Target is getting cleaned out,” and “This is awful out here. No police. Looting continues,” before being pulled from the coverage.

According to eyewitnesses, Target was still being looted three hours later. Sadly, it wasn’t the only store being attacked, an AutoZone was set on fire by the rioters and numerous small businesses were plundered. Worse still, there was a death amid the looting.

How does any of this carnage get justice for George Floyd?

The video of the police officer’s brutality, which resulted in George Floyd’s death already had the nation’s attention. The Minneapolis Mayor Jacob Frey was already calling for the police officer’s arrest, saying: “I’ve wrestled with, more than anything else over the last 36 hours, one fundamental question: Why is the man who killed George Floyd, not in jail?”

Plus, President Trump wrote via Twitter: “At my request, the FBI and the Department of Justice are already well into an investigation as to the very sad and tragic death in Minnesota of George Floyd. I have asked for this investigation to be expedited and greatly appreciate all of the work done by local law enforcement. My heart goes out to George’s family and friends. Justice will be served!”

With the President, the FBI, and the Mayor, all chasing justice, why did the protest become something violent?

According to a report by the Star Tribune, the protest which began outside the 3rd District Police Department, became violent after the police attempted to disperse the crowd with the use of flash-bang grenades, tear gas, and other projectiles.

If true, the initial reaction, where protestors broke the windows of the 3rd District Police Department may have been a retaliation. Yet, nothing excuses that reaction or any of the events that followed.

CHECK OUT: Watch MSNBC get caught out by a member of public, leaving the reporter with no option but confess.

During the looting, more stores were attacked, including small local stores. One pawn shop owner protected their store with fatal consequences. The looter, who was wounded in the altercation later died in hospital.

The big question is, where were the police in all of this?

During the riots, KARE, an NBC-affiliated television station, interviewed the chief of the Minneapolis Police Department. During that interview, he said that it was too dangerous to confront the rioters and stop the looting. The KARE anchor double-checked with the chief, making sure that’s what was being said.

The KARE anchor asked: “I want to make sure I’m understanding you correctly. So what you are saying is that it’s too dangerous for police to directly confront the looters. So you’ve made the decision to let that site go for now and focus on keeping the rest of the neighborhood as safe as possible?”

The police chief replied: “Absolutely. Our officers have had molotov cocktails thrown at them, rocks and other projecticles. Their safety is paramount.”

When the chips were down it became every-person for themselves. Surely the National Guard should have been called in?