AMERICAN RIOTS: Looter Admits It’s “All About The Money” 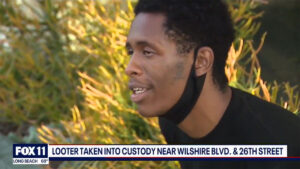 Criminal, disgusting, and brutal are words that sum up the riots that have swept across the nation. The original protests were about justice, but what followed has been about selfishness, not George Floyd. What’s worse is that it’s only destroying more innocent lives.

Melugin tweeted: “BREAKING: We just witnessed a group of looters hit a store in West LA off Wilshire by 26th, the car got away but one of the looters didn’t get in fast enough and LAPD chased him down and caught him.”

When Melugin asked whether it had anything to do with the protests in Minnesota, the looter said: “I mean a little bit to do with that too. But, not me, I’m out here for the dough.”

Melugin then asked whether it was worth it, the looter replied: “Obviously not. I’m here hemmed up. If you want to get some money, do it right. Don’t do it the dumb way, do it the smart way.”

The looted store was a New Balance in Santa Monica and the others involved got away.

CHECK OUT: The celebrities who are bailing out rioters from jail.

The riots continued Sunday night across several major cities including Washington, D.C., New York City, and Los Angeles. The hijacked protests for justice, which began in Minneapolis, have resulted in a total of 62,000 soldiers from the National Guard being deployed to 24 states and the District of Columbia so far.

In Washington D.C., the Secret Service, U.S. Marshals, and Drug Enforcement Administration (DEA) were even deployed to the streets to assist local police as violence escalated to the point where even The White House had its external lights turned out so that agents could use night vision to watch the rioters outside.

Despite the darkness, there has been some light.

One protest in Flint, Michigan, ended in scenes of unity, as Genesee County Sheriff Christopher Swanson removed his riot gear and walked alongside protesters. While in Kentucky, peaceful protesters surrounded a police officer who had been separated from his squad, protecting him from rioters.

The former police officer who callously murdered George Floyd, the man in Minneapolis whose death started these protests, has been charged with murder and manslaughter. The other, now former-officers, who stood silent while Floyd died also look likely to face serious criminal charges.

Minneapolis police chief Medaria Arradondo said: “Mr. Floyd died in our hands and so I see that as being complicit. Silence and inaction, you’re complicit. If there was one solitary voice that would have intervened … that’s what I would have hoped for.”

The big question now is, how many more lives will these riots ruin?