Ron DeSantis Blasts ‘Little Elf’ Fauci for Permanent Damage of Lockdowns: ‘Chuck Him Across the Potomac’ 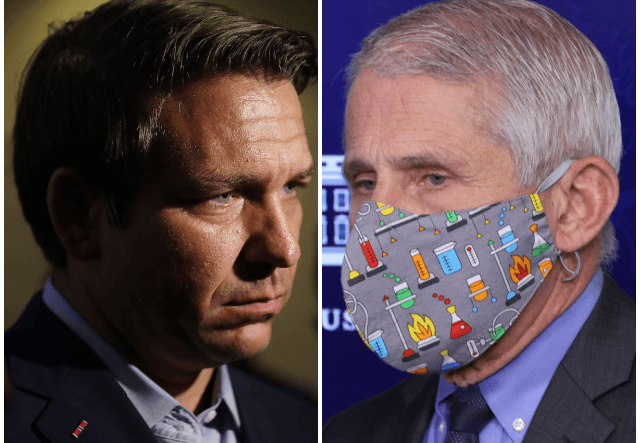 “People like Fauci saying that his lockdowns didn’t cause any permanent damage to any young kids. I got news for you. It did, and we are going to reap those rewards across the whole country for years and years and years because they treated kids so poorly,” DeSantis said during the “Keep Florida Free rally, with a banner reading “Don’t Tread on Florida” serving as his backdrop.

“And I’m just sick of seeing him,” he said of Fauci — an individual the governor has called out time and time again.

“I know he says he’s going to retire. Someone needs to grab that little elf and chuck him across the Potomac,” the governor said to cheers:

His remarks come as Fauci continues to dig his heels in, contending that lockdowns did not “forever irreparably” damage anyone. He also suggested that he is not responsible for lockdowns, prompting Sen. Rand Paul (R-KY) to accuse him of backpedaling.

“He’s been blatantly dishonest throughout,” Paul said during an appearance on Hannity:

DeSantis has long highlighted the damage Fauci caused with his hysteria and history of flip flopping to better suit his political purposes — from his promotion of universal masking to lockdowns and vaccine mandates. Florida refused to follow suit, allowing businesses to reopen and children to go back to in-person learning as blue states remained shuttered and suffered economically.

“You know, Fauci will say, ‘Chinese scientists, they’re not Communists. They’re scientists.’ When you’re in China, you’re all controlled by the CCP and yes, Fauci funded them at the Wuhan lab and he lied about it,” DeSantis said at the time. “And why is he not being prosecuted or lying to Congress?”

Indeed, Fauci has refused to admit that he lied about the National Institutes of Health funding gain-of-function research at the Wuhan lab, despite clear evidence showing otherwise. Rather, Fauci has instead opted to change the definition of gain-of-function to, as Sen. Paul said, cover up the lie.

“You’re simply saying it doesn’t exist because you changed the definition on the NIH website. This is terrible and you’re completely trying to escape the idea that we should do something about trying to prevent a pandemic from leaking from a lab,” Paul said during a November hearing.

Despite Fauci stating he is leaving his high profile posts in December — conveniently after the midterm elections, where Republicans hope to take the majority away from Democrats in the House and Senate — top Republicans have warned that it will not protect Fauci from oversight.