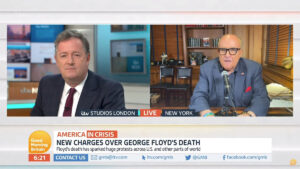 In the early hours of the morning, former New York mayor, and President Trump’s lawyer, Rudy Giuliani went on UK television for an interview on Good Morning Britain.

The show, which is hosted by Piers Morgan, who is apparently a personal friend of the President, and Susanna Reid, ended abruptly with Giuliani being accused of swearing and being crazy.

Giuliani went full throttle in the defense of President Trump after Morgan and Reid asked questions about the President’s tweet which read: “These THUGS are dishonoring the memory of George Floyd, and I won’t let that happen. Just spoke to Governor Tim Walz and told him that the Military is with him all the way. Any difficulty and we will assume control but, when the looting starts, the shooting starts. Thank you!”

The tweet was flagged by Twitter for inciting violence and called out for being racist as it repeated words spoken by Walter E. Headley, a racist police chief in Miami back in 1967.

The President obviously refutes the accusations.

Giuliani jumped in immediately: “Do you think he went to a book and took that out?”

He continued: “I’ve known him for 30 years, and I know he’s a fair man who doesn’t have a racist bone in his body, you know that too. And therefore you’re going through politically correct propaganda.”

Later in the interview, Giuliani added: “He may have picked a quote that came 30-years ago from some nutty horrible racist, but that is not what he did on purpose. That’s what you attributed to him because they’re (the media) prejudiced against him.”

Calling Out The Media

During the heated interview, Giuliani also said: “President Trump is criticized for everything by the left-wing media. He has handled it (George Floyd’s murder) exactly correctly. He immediately brought the FBI into it.”

He continued: “The difference is that the left-wing media, including the international media, treats President Trump in a totally different way and exaggerates all the situations involving him. He expressed immediately his horror at what happened. He brought the FBI into it. He along with everyone in this country Republican, Democrat, liberal, conservative, condemns what that police officer did.”

The interview lasted 14-minutes and ended in a slug fest, with accusations that Giuliana said the F-word, but he actually said “sucked.”

Towards the end, Piers Morgan asked: “What happened to you? You used to be one of the most respected and revered people in America. You sound completely barking mad… you have lost the plot, and it’s sad to see.”

Giulani retaliated, saying: “You were the one who got thrown off of television here… so don’t tell me I’ve lost anything. I know what happened to your show Piers, and I remember the mistakes you made and I remembered how you sucked up, so don’t give me that stuff.”

Check out the full video here, or see a clip below. It’s not to be missed.