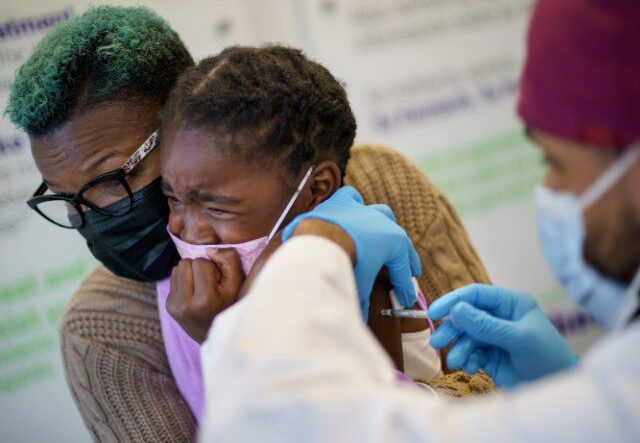 One’s decision not to vaccinate is “child abuse” according to a recent Salon piece that accused conservatives of using children as “pawns in their gross political games,” viewing them as property, and damaging their “mental and emotional health” while “tearing families apart,” largely in order to undermine President Biden.

Penned by senior politics writer Amanda Marcotte and titled “Vaccine refusal is child abuse,” the Friday Salon essay begins by accusing Republicans of opposing vaccination against the coronavirus in order to “sabotage” the Biden presidency.

“Republican media and politicians adopted an anti-vaccine message for one obvious purpose: To sabotage Joe Biden’s presidency by prolonging the pandemic,” Marcotte writes.

“In this, they’ve been wildly successful,” she adds.

Claiming the “vast majority” of COVID-19 deaths are a result of “vaccine refusal,” she asserts that opposition to vaccines has hurt conservatives.

“The public’s grief and weariness has definitely helped [drive] down Biden’s approval ratings, but at immense cost to Republican voters,” she writes. “Despite blue areas being denser than red, the death rate in Donald Trump-voting counties soared above Biden-voting counties, in a way that can only be described as ‘exponential.’”

However, according to Marcotte, it can be “hard to care.”

“If a bunch of right-wingers want to die for the ‘let’s go Brandon’ cause at the behest of sadistic and vaccinated Fox News hosts, at a certain point the attitude of much of blue America is ‘have at it!’” she says, adding that maybe “killing thousands of their own a week will backfire by reducing their voter margins in some tight races.”

Highlighting the supposed dangers of parents who refuse to vaccinate, she then describes such practices as “child abuse.”

“But there is one group of innocents that are suffering because of [the] get-Covid-to-hurt-Biden campaign: Children,” she writes.

“Anti-vaccination ideology is a form of child abuse,” she adds.

Admitting that children “may be relatively safe from severe illness or death” associated with COVID-19, Marcotte argues that they are not safe from “having parents who care more about pleasing their Fox News masters than protecting their families.”

“Unlike case rates and death rates, the amount of emotional pain that right-wingers are inflicting on children in their anti-vaccination mania may be immeasurable,” she adds.

She details several “hair-curling” stories that she believes prove the “damage anti-vaxxers are doing to the mental and emotional health of their children.”

One involves a teen who blames himself for the death of his unvaccinated mother, another a “far-right trucker” unwilling to vaccinate to visit his sick child, and an “anti-vaccine Republican” who regrets his choice after his pregnant wife nearly died after contracting the respiratory virus.

In addition, Marcotte cites a 16-year-old who underwent vaccination against his parents wishes, which she claims proves “high schoolers have more emotional maturity than your typical Trump voter.”

Maintaining that such incidents should not be a “surprise,” she then accuses Republicans of hypocrisy.

“Republicans love to talk up how they’re ‘pro-life’ and believe in ‘family values,’ but a closer look at how right-wing ideology operates shows the opposite,” she writes.

“All too often, children aren’t regarded as vulnerable people who deserve care and protection, but more like property to be disposed of as the parents see fit,” she adds.

Marcotte continues by listing several of the “endless” examples of the right’s mistreatment of children.

“Due to Republican obstruction, the U.S. is the only United Nations member state not to ratify the Convention on the Rights of Child — mainly because Republicans fear it will interfere with the ‘right’ to beat children and force religious ideology on them,” she writes.

“Conservatives also continue to fight to deny trans children their right to be treated with basic decency, to force children into ‘pray the gay away’ abuse farms, and compel pregnant minors to give birth against their will,” she adds.

She also lists Republicans sowing “hysterics” in school boards nationwide as another example.

“Conservatives say they want to ban mask mandates and ‘critical race theory’ in order to ‘protect’ the children. But even a cursory examination shows the opposite is true,” she writes, charging them with using children “as pawns in their gross political games.”

Regarding right-wing opposition to critical race theory education in schools, she claims it is “just a hoax that was propped up as a cover story to deny children basic education.”

“Once again, Republicans are trying to deprive children of a fundamental right,” she writes.

“Worse, they’re not only trying to undermine the quality of education. Many right-wing activists want to destroy public education altogether,” she asserts, “believing the parent’s right to control their child, to treat them like property instead of people, is absolute.”

According to Marcotte, all these “shocking” incidents are the result of a right-wing campaign to “undermine” President Biden’s approval ratings.

“It may be shocking to see how many people are depriving children of medical care, abandoning children, and leaving them orphans — all for the asinine purpose of trying to undermine Biden’s approval numbers,” she writes.

“Perhaps it shouldn’t be,” she concludes. “That’s simply a logical extension of a conservative ideology that treats children as objects to be controlled, not full people in their own right.”

The piece comes as those opposing vaccines or vaccine mandates continue to be vilified by many on the left and the media.

In addition, a Los Angeles Times essay claimed mockery is “not necessarily the wrong reaction” to the deaths of those who “publicly mocked anti-COVID measures and encouraged others to follow suit.”

“There may be no other way to make sure that the lessons of these teachable moments are heard,” it stated.

In August, former President Barack Obama’s Secretary of Education Arne Duncan compared those who exercise their freedom to make health decisions regarding COVID-19 to the Kabul airport suicide bombers who slaughtered more than 100 people, including 13 U.S. service members.