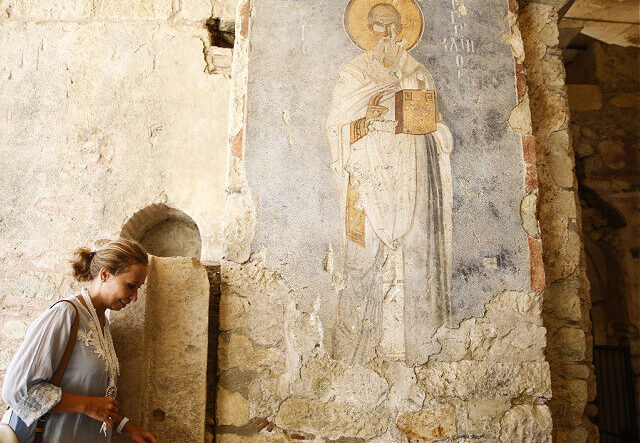 The tomb of St. Nicholas, who inspired the Christmas legend of Santa Claus, was discovered underneath a church in Turkey.

Researchers made the discovery after uncovering a third and fourth-century church (or basilica) where St. Nicholas was Bishop in Myra of the Roman Empire, according to Demirören News Agency (DHA), a Turkish News publication. The location is currently in Demre of the Antalya Province in Turkey. However, rising Mediterranean seawater in the Middle Ages flooded the church and the site has since been buried under alluvial deposits. Another church was constructed over the original basilica in the seventh and eighth centuries to protect it.

After archeologists excavated the church, they discovered an early fourth-century floor covering from the ancient basilica — which is believed to be the same floor where St. Nicholas stepped foot.

Dr. Osman Eravşar, Chairman of the Antalya Cultural Heritage Preservation Regional Board, told DHA last week that it was “the most important discovery and finding regarding the exact location of his tomb.”

Russian Orthodox believers line up to kiss the relics of Saint Nicholas in the Christ the Savior Cathedral in Moscow on May 22, 2017. (Photo credit should read NATALIA KOLESNIKOVA/AFP/Getty Images)

It is traditionally believed that his remains had already been brought to Bari, Italy, by merchants from the basilica in 1087. However, Eravşar noted that other relics could still be inside the recently discovered tomb.

The fourth-century Bishop, who lived from 270 to 343 A.D., is a beloved saint who is venerated by Christians all over the world, particularly in the Roman Catholic Church and Orthodox Churches.

Nicholas was born during the third century in the village of Patara, which at the time was part of Greece and is now part of Turkey. He became the Bishop of Myra while still a young man, being known for his generosity to those in need.  His reputed habit of giving gifts, often in secret, gave rise to the legend of Santa Claus – a variant of Saint Nicholas. The iconic red hat and coat were taken from the bishop’s vestments that Nicholas was believed to wear.

St. Nicholas is venerated by Catholics as well as the Orthodox, and is the patron saint of sailors and merchants, as well as pawnbrokers, archers, travelers, bankers, children and repentant thieves.

DHA noted that thousands of Christian tourists come to Demre each year to visit the church where St. Nicholas reigned as Bishop.