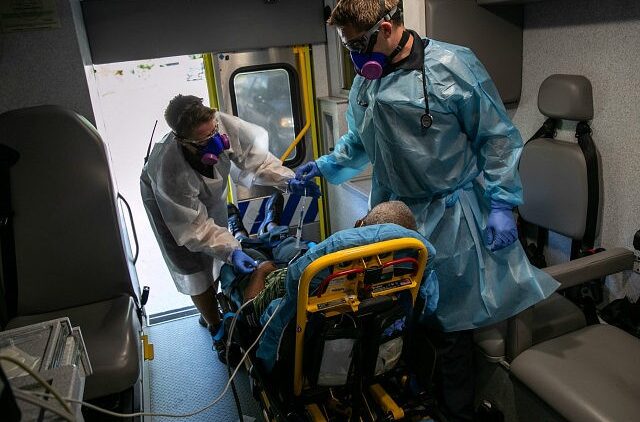 Scientists are scrambling to determine if the Chinese coronavirus’s new variant will worsen the pandemic.

In Los Angeles, public health officials are concerned the mutant strain may already be fueling a surge in infections there.

Despite implementing the strictest lockdown and mask mandates in the country, California, the most populous state in America, is now the epicenter for the worst coronavirus spread in the United States, overwhelming hospitals and killing more people each day.

On December 21, the World Health Organization, a United Nations body, and independent experts said there is no evidence the new strain is neither more dangerous than the original nor resistant to the vaccine.

Still, in Los Angeles, the most populous county in the nation, public health officials have begun to test residents for the new mutant strain.

Nevertheless, a few days later, health officials in Los Angeles indicated that they believe that the mutant strain is “likely” fueling the county’s surge, the Los Angeles Times reported.

“Local officials are concerned that if the new strain is already present in Southern California, it could be behind some of the explosive growth in COVID-19 [coronavirus disease] cases seen since the Thanksgiving holiday period,” the newspaper added.

Still, it will take about a week to finish the process, she said.https://b1b8c4a4fbc56ced87c2c13661712376.safeframe.googlesyndication.com/safeframe/1-0-37/html/container.html

When I spoke with the state Department of Public Health, they indicated that they’ve been looking and didn’t think they had seen. But you know, you have to know what you’re looking for. So I think everyone at this point that’s seeing these kinds of surges is obviously looking to see, “Do we have that particular variant?”

The W.H.O. and independent experts have indicated that the new variant is a normal part of the virus’s evolution.

“This is a normal part of virus evolution,” Mike Ryan, the W.H.O. emergencies chief, said at the same briefing.Volume 90%

“At this stage, we don’t have evidence that this [new strain of the] virus will change the severity, the diagnostics, or the value of vaccines going forward,” he also said.

So far, even though we have seen a number of changes, a number of mutations, none has made a significant impact on either the susceptibility of the virus to any of the currently used therapeutics, drugs or the vaccines under development and one hopes that will continue to be the case.

Not everyone in the medical community is entirely sure the approved vaccines will combat the new strain.

“Scientists say they are hopeful, but unsure, that the vaccines will repel the mutants,” the San Diego Union-Tribune reported last Friday, citing five top scientists involved in combating the deadly and contagious virus.

Greg Lemke, a molecular neurobiologist at the Salk Institute, told the Union-Tribune that the mutant version of the virus does “not necessarily,” pose a greater threat.

Some scientists who spoke to the newspaper, however, disagreed with Lemke.

“People are concerned that the mutation might be more lethal. That is an issue,” Nancy Binkin, professor of public health at the University of California, San Diego, declared. “But even if it is not, you could have more hospitalizations and more deaths because a greater number of people become infected.”

The Union-Tribune reported it remains unclear whether the new strain will deepen the pandemic in the United States.

“There’s lots of uncertainty because things are happening quickly. Researchers also say the U.S. hasn’t done enough to search for mutant strains of the virus and to figure out whether they’ll worsen the pandemic,” it reported.

Scientists have warned that the variant may be more contagious than the original, leading to more infections. However, many other scientists, including Ryan from W.H.O., have indicated there is not enough evidence to support this conclusion.

Most people who contract the original virus survive. There has also been a sharp drop in mortality among hospitalized virus patients of all ages.

Matt Hancock, the health secretary in the U.K. where the new variant was first detected, reportedly pointed out on December 14 that there is no evidence that it may make the disease more severe, echoing other experts.

“Work is ongoing to look at [the] transmission, and the increase rate of transmission and how much of that is attributable to this particular variant,” Ryan from the W.H.O. told reporters. He stressed that the new strain “can be contained” even if it is more contagious.

“There is no evidence that this variant causes more severe illness or increased risk of death or that [the] available vaccines will not be as effective,” a memo issued by the L.A. County Department of Public Health on Christmas Eve said, according to the Los Angeles Times.

Until recently, there were no vaccines for coronaviruses in humans.

Nigeria may have reportedly found a different variant.