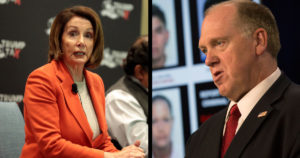 A new book titled “Defend the Border and Save Lives: Solving Our Most Important Humanitarian and Security Crisis” is now available and it’s going to upset a lot of the far left because it pulls no punches on the immigration debate.

Author, Tom Homan, who served under President Trump as Immigration and Customs Enforcement (ICE) Chief delivers damning statistics that cannot be ignored. Even the President is endorsing it.

Homan said about his book: “I wanted to identify to the American people that illegal immigration is not a victimless crime. Here’s why you should care. Here’s what’s wrong, and here’s how we fix it.”

The reason this book can strike hard against those in border control denial goes beyond Homan’s 34-year service, from cop-to-ICE Chief. The impact comes because he also worked under President Obama, where he was celebrated for his work.

That’s right, these damning statistics not only come from a person with experience, but it also comes from someone who worked under a Democrat President. There’s no doubt Homan is in a perfect position to once and for all end the immigration debate.

One Amazon reviewer wrote: “Mr. Homan valiantly confronts the defamatory and deceptive criticism from the ‘Open-Borders’ crowd. He cuts through the hyperbole, separating fact from fiction, to paint an accurate picture of the magnitude and urgency of the threat.”

We couldn’t have said it any better ourselves.

Who is Tom Homan

By 2013, when President Obama promoted him to Executive Associate Director of Immigration and Customs Enforcement (ICE) he had worked as a border patrol agent, an investigator, and a supervisor.

In 2015, President Obama gave Homan the Presidential Rank Award and the Washington Post wrote an article celebrating his status and record.

In January 2017, Tom Homan became the acting Director of ICE. By June 2018, he had retired. During his time he supported the passing of Kate’s Law and pushed to end sanctuary cities. He even said that politicians who support sanctuary city policies should be charged with crimes.

During his time as the Director of ICE, Homan stated that “despite committing a crime by entering the country illegally, illegal immigrants do not commit more crimes than the rest of the population in the U.S.”

In June 2018, Homan defended the policy where Children are separated from parents. He said: “Children and parents get separated every day across this country when a parent is charged with a criminal offense. It’s sad to see children cry when you take a parent out of a home, but because it’s sad, doesn’t mean that we ignore the law.”

In a CNN interview, he added: “If you want to blame someone for separating families (at the border), blame the parents who choose to break the law.”

The former ICE Director now works as a contributor for Fox News.

CHECK OUT: China’s Communist Party outraged because others are joining the demand for an international investigation.

In an interview with The Daily Caller, Homan said: “I’m a cop. I never thought I’d write a book, but I wrote it pretty much out of frustration.”

During the interview he picks out the following facts:

He even explains why they won’t like it: “I explain what [Border Patrol and ICE does], and most importantly what they don’t do. They never arrested anybody in church, they never arrested in the hospital. But the left wants to think that. It’s my intent to put the false narrative to bed.”

Whatever you think about Tom Homan, there’s one thing for certain, his book could end up crushing the fake narratives surrounding illegal immigration and that’s definitely a positive.