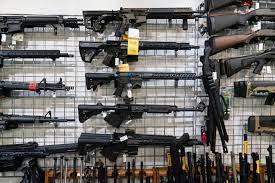 A South Carolina county is equipping schools with new tools to bolster safety and ensure that nothing like the mass shooting at Robb Elementary School in Uvalde, Texas, can happen in that community.

The kits come with axes, pry bars, and cutting tools that are useful for breaking through barricaded entryways to classrooms or other school areas.

“We can breach that classroom or that door as quickly as possible to get in and stop or neutralize a threat,” Mueller said.

The nation was shocked in May when a deranged gunman in Uvalde, Texas, gained access to Robb Elementary School and massacred a room full of school children. The gunman shut himself inside a classroom and murdered 19 students and two teachers. Responding police officers in body armor waited in the hallway outside for more than an hour before breaching the classroom and neutralizing the shooter.Don’t miss out on content from Dave Rubin free of big tech censorship. Listen to The Rubin Report now.

Mueller said that equipping his deputies and school resource officers with breaching kits will prevent the same mistakes that led to children bleeding out and dying while waiting for help.

“We want to take these breaching kits and we want to put those in the hands of all our SROs, as well as our other officers who are out patrolling during school hours. And we’re actually going to try to place them in all the schools,” the sheriff told WSPA.

He noted that SWAT teams use breaching kits in hostile situations and can save valuable time responding to a threat.

“Tragically, because after what we saw in Texas, we can’t sit back and wait 30 minutes to an hour plus for breaching to arrive on the scene,” he added.

Demand for breaching kits has surged as law enforcement agencies nationwide are updating their policies in response to the Uvalde massacre. Mueller said his department is looking at ways to buy each tool in the kit individually instead of buying the kits whole, which can cost anywhere from $650-800 per kit.

“So, we’re looking at piecing these out from our local Lowe’s, Ace Hardware, and buying the individual pieces and we think we can save a little bit of money by buying these pieces individually, versus a kit,” he said.

The sheriff said he is asking local authorities to approve more funding for his office to bolster school safety.