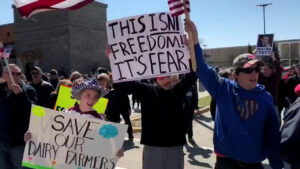 In a 4-3 decision Wednesday, the Wisconsin Supreme Court overturned the state’s stay-at-home order, calling it “unlawful” and “unenforceable.”

Republicans filed for the lawsuit back in April after the stay-at-home order was extended to May 26 by Democratic Gov. Tony Evers and the state’s Department of Health Services.

The Republican lawmakers said at the time, that if the order remains in effect: “many Wisconsinites will have lost their jobs, and many companies will have gone under, to say nothing of the Order’s countless other downstream societal effects. Our State will be in shambles.”

The lawsuit was specifically against Andrea Palm, the state’s Department of Health Services Secretary and other health officials who made the decision to extend, not specifically Gov. Evers.

When making their decision, the justices wrote: “An agency cannot confer on itself the power to dictate the lives of law-abiding individuals as comprehensively as the order does without reaching beyond the executive branch’s authority.”

Effectively. The stay-at-home executive order was against the U.S. Constitution.

Wisconsin’s Gov. Evers said in a CNN interview: “When you have more people in a small space — I don’t care if it’s bars, restaurants or your home — you’re going to be able to spread the virus. And so now, today, thanks to the Republican legislators who convinced four Supreme Court justices to not look at the law but look at their political careers I guess — it’s a bad day for Wisconsin.”

Or a good day, depending on which side of the argument you stand.

Many people in Wisconsin will celebrate the outcome, especially now that all restrictions against businesses and gatherings are lifted. The one exception is that schools will remain closed until fall.

The Governor later tweeted: “Republicans are exploiting a global pandemic to further their attempts to undermine the will of the people. But what’s at stake goes far beyond political power–lives are on the line.”

If the Governor had asked the people of Wisconsin what they wanted, instead of just extending the stay-at-home order, then there would have been no problems. It would have been a democracy in action.

Instead, the date was extended on the back of medical data that has been consistently wrong across the nation. People couldn’t survive economically and felt constitutionally violated.

The Governor says Republicans exploited the situation, but the reality is, they acted upon what a significant amount of people wanted.

CHECK OUT: The Seattle Officer who stood up for the Constitution is getting punished.

Not The First Act Of Defiance

This isn’t the first time courts and Republicans have stepped in to defend the Constitution during this pandemic lockdown.

In Virginia, Gov. Ralph Northam threatened to jail and fine Pastor Kevin Wilson, of the Lighthouse Fellowship Church after holding a service for 16-people in a location built for nearly-300. Once in court, the Justice Department sided with the Church and the constitution.

In Kentucky, a Maryville Baptist Church defied Gov. Andy Beshear’s stay-at-home order with a drive-in congregation. Those in attendance remained in their cars on a parking lot. The 6th Circuit Court of Appeals ruled in favor of the Church saying: “The breadth of the ban on religious services, together with a haven for numerous secular exceptions, should give pause to anyone who prizes religious freedom.”

In May, Texas business owner Shelley Luther was sent to jail by a Democrat Judge after she refused to apologize for reopening early so that she could feed her kids.

The next day, Texas Lt. Gov. Dan Patrick got out his checkbook, paid the $7,000 fine, and even volunteered to go under house-arrest so the business owner could get out of jail. She is now free.

Whichever way you look at it. Courts and Republicans are standing up for peoples rights.

CHECK OUT: Airlines that were bailed out to the value of $25-billion are ignoring social distancing as small businesses, who are unable to get financial support are penalized for lesser actions.