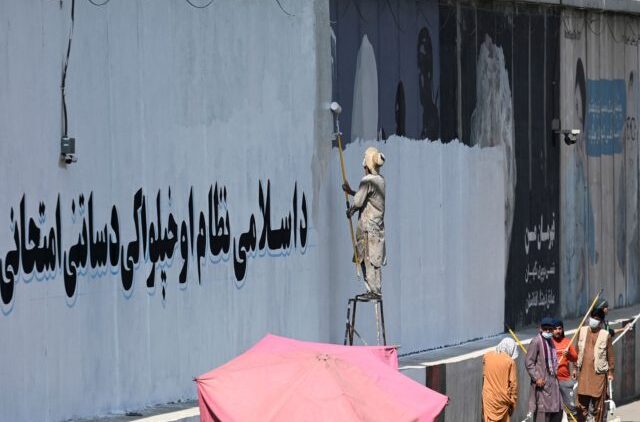 Taliban terrorists in Kabul have started painting over murals that adorn the capital’s streets, including one of George Floyd, with “victory slogans” applauding the establishment of their Islamic Caliphate.

The Guardian reported the jihadist organization started to replace the street art with pictures of their flags and other Islamic slogans as they reimpose their strict vision of how Afghanistan should be in the future.

“Artlords,” according to the report, were a group of creative people in the city that painted the murals. The groups spent the last eight years painting their murals in the city, over walls and blast barriers up until the Taliban terrorists took the city over.

An Afghan municipality worker cleans a road next to a wall mural in Kabul on September 5, 2021. Within weeks of the Taliban taking the capital, many of the street art pieces have been painted over, replaced by drab propaganda slogans as the Islamist reimpose their austere vision on Afghanistan. ((HOSHANG HASHIMI/AFP via Getty Images)

The works painted included George Floyd from the United States, Afghan refugees in Iran drowning, and even the U.S. signing the agreement with the Taliban to work towards peace.

These murals have been painted over with slogans from the Taliban, congratulating the county with “victory.” The “Artlords” co-founder, Omaid Sharifi, told the Guardian that despite the murals being painted over, the memories of Tetsu Nakamura would not go away. Tetsu Nakamura was a Japanese doctor and aid worker killed in 2019. He added:

“All of the murals are an extension of me, extension of Artlords and extension of the artists who worked on them,” Sharifi told the Guardian. “Some of these murals were the soul of Kabul. They gave beauty to the city and kindness to the people of Kabul who were suffering.”
[…]

“Whenever I see one of them destroyed, I feel like a part of me is getting destroyed and punished as well,” he said. “These murals not only belong to me or the Artlords, they belong to the people of Afghanistan because for each of them we invited 50 to 200 people to paint them.
[…]

“Our aim was to promote critical thinking and put pressure on the government to accept people’s demands,” Sharifi said. “Taliban was and is an armed movement that only understands guns, violence, beating, beheading, suicide vests and bombs. There is no vocabulary about art in the Taliban’s dictionary. They even cannot imagine art. I think they don’t understand it, that’s why they are destroying it.”

Sharifi posted pictures of the “Artlords” work on social media and what the murals look like today. One of the murals was the U.S. special envoy Zalmay Khalilzad shaking hands with the Taliban co-founder Abdul Ghani Baradar after signing the 2020 deal.