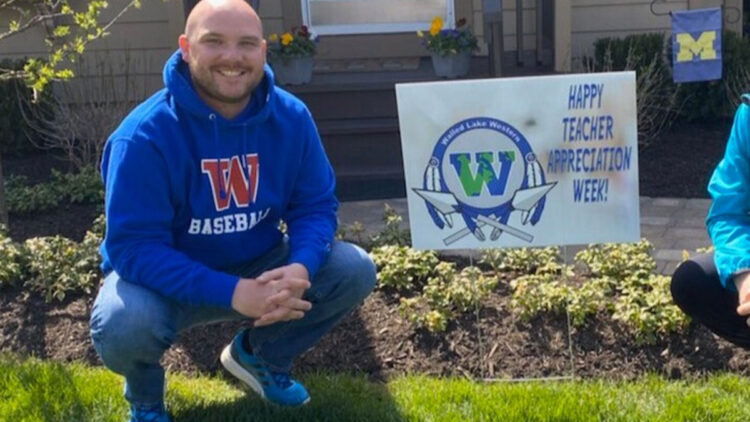 Considering the left scream fascism, they do a good job of being fascists themselves. For example: take the Michigan teacher fired for supporting our democratically elected President.

Wikipedia describes fascism as “a form of far-right, authoritarian ultranationalism characterized by dictatorial power, forcible suppression of opposition, as well as strong regimentation of society.”

Far-right? Clearly, it’s the far-left people need to watch out for.

Michigan, July 10, 2020: Officials from the Walled Lake school district track down Justin Kucera, a coach, and social studies teacher. They haul him into a closed-door meeting, where the principal and district superintendent give the ultimatum… Resign, or be fired.

Surely he must have done something serious?

This is the teacher crime.

CHECK OUT: A student is called out by cops for All Lives Matter hate crime attack on himself.

In today’s political climate, context is everything. Coach Kucera’s context was that he supported the President’s speech to reopen schools.

Kucera told The Washington Free Beacon: “I was required to meet with [human resources], the superintendent, and my principal [on July 10]. They initially took my statement on why I tweeted and they told me they would have a decision about my future employment in the upcoming days. When they completed the meeting, I was told I had the option to either be fired or resign.”

He continued: “I know a lot of people are just rooting for Trump to fail, and I don’t think that anybody should do that. Agree with him or not, you should want the president to do well. I apologized that [my tweet] brought so much negative attention, but I’m not sorry for what I said.”

One innocent tweet gets a teacher fired. Yet, other Walled Lake teachers, like Paulette Loe, who wrote an article called “How To Beat Trump” for the Atlantic was never fired. Nor was Nicole Estes, a teacher in the same district who called President Trump a sociopath and narcissist on Facebook.

All further proof that the education sector fits the fascist definition.

CHECK OUT: Watch the riots continue in Portland and Seattle. Including organized attacks proving riots are domestic terrorism.

One graduate of Walled Lake Western, Bryant Hixson said: “Prior to Mr. Kucera’s tweet, I cannot recall an instance where he shared his political affiliations while teaching or coaching.”

Hixson continued: “My political views have no impact on how I feel towards Mr. Kucera. Mr. Kucera has always been supportive of me as my AP World History and student leadership teacher and as my baseball and basketball coach.”

One of the student parents told The Washington Free Beacon: “Justin coached my son his entire high school career and also was his AP History teacher and student leadership teacher for two years. I know Justin very well. If there’s one thing that I would commend Justin for is, he always tried to stay apolitical. He always tried to stay right down the middle, avoid [political] conversations, and let the students make their own call based on their own life experiences.”

Not all reactions were positive, some students were surprised the teacher supported President Trump.

Yet, the school and district reacted in a way that will inevitably lead to a First Amendment lawsuit. Which, if the Constitution means anything still, coach Kucera will win with ease.

CHECK OUT: Attorney General steps in for Second Amendment couple who defended themselves against trespassing protesters.