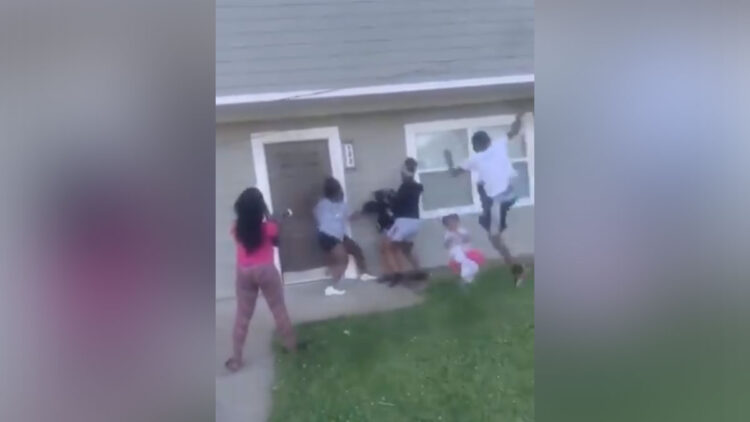 A video is being shared on Twitter showing a young pregnant girl being beaten at her door by two others. During the video a young boy joins in, kicking the mom’s young child in the face before stamping on the mother.

A third girl can be seen filming, plus whoever recorded the shared video is also complicit.

Warning, the video below includes swearing and violence.

The young pregnant girl, who is reportedly from Illinois, was attacked in Brooklyn, New York on Friday, July 10.

The mother of the boy later spoke out on Facebook saying: “He didn’t try 2 kick that baby he tried 2 jump over the baby on to her and made a mistake…as y’all can see the baby ran from under the girl fighting while he was coming down.”

The mother said that her son is not the type of person to kick a baby in the face, yet he’s clearly someone who’ll kick a pregnant girl while she’s down.

We’re not alone in thinking the kick on the toddler was intentional.

One person commented: “Okay people are really trying to say he hit the child on accident. I think it was intentional 100% because he had two clear other ways to “stomp” or “hit” the mother if he really wanted to but he went out his way to take the more difficult path? Makes no sense.”

Another person said: “Whether or not he did it on purpose, He didn’t even care to see if the child was alright. And then he continued to kick a girl already getting jumped.”

And finally: “If CNN played these black brutality videos as much as they played police brutality videos, it’s all anyone would ever talk about. People would be demanding cities gave more money to the police rather than defunding them.”

According to reports, police are involved and the pregnant girl, who fortunately suffered only minor head injuries identified those who attacked her and the child.

CHECK OUT: Watch what happens when an Antifa punk messes with the wrong car.