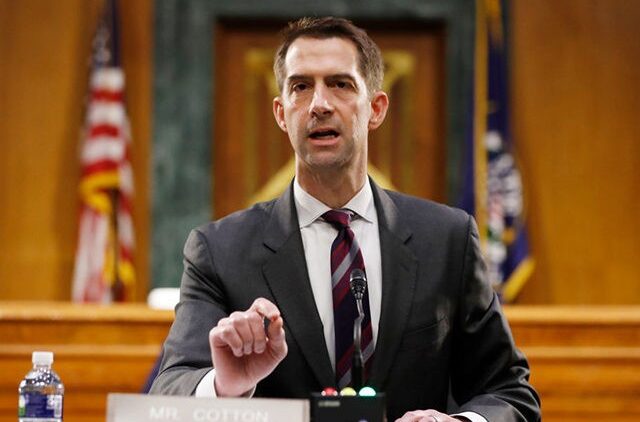 Sen. Tom Cotton (R-AR) has called for U.S. Olympic track and field athlete Gwen Berry to be removed from the team after she turned away from the American flag during the playing of the National Anthem after qualifying for the Tokyo Olympics during trials in Oregon.

“If Ms. Berry is so embarrassed by America, then there’s no reason she needs to compete for our country,” Cotton added. “She should be removed from the Olympic team.”

Rep. Dan Crenshaw (R-TX) has also called for Berry to be removed from the U.S. Olympic team, saying “the entire point of the Olympic team is to represent the United States of America.”

“It’s one thing when these NBA players do it, OK fine, we’ll just stop watching. But now the Olympic team? And it’s multiple cases of this,” Crenshaw said. “They should be removed. That should be the bare minimum requirement is that you believe in the country representing.”

In a tweet on Monday addressed to critics, particularly Crenshaw, Berry claimed those that take issue with her stance on the matter are “obsessed” with her and went on to say that critics are attempting to “put words in my mouth.”

“I never said I hated this country,” Berry stated. “People try to put words in my mouth but they can’t. That’s why I speak out. I LOVE MY PEOPLE.”

Following the trials, Berry told reporters that she was “set up” with the playing of the Star-Spangled Banner.

“I feel like it was a set-up, and they did it on purpose,” Berry said of the anthem being played. “I was pissed, to be honest.”

“The anthem doesn’t speak for me,” Berry added. “It never has. I didn’t really want to be up there. Like I said, it was a setup. I was hot, I was ready