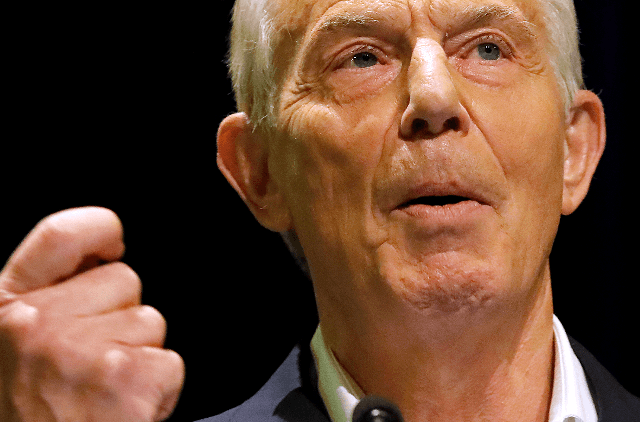 Former Labour prime minister Tony Blair is pushing Boris Johnson to use British leadership of the G7 to create a global vaccine passport.

“The UK faces a choice: lead or be led,” insists a new report from the Tony Blair Institute for Global Change, established by the Iraq War architect after he stepped away from electoral politics.

“If we choose to wait, a confusing array of different passports await our citizens,” the Institute claims, suggesting that a global vaccine passport — or “Global Covid Travel Pass” — would be in the people’s best interests.

“We can avoid this and the complications of multiple passes and varying travel requirements if the UK takes the lead on developing a single, global COVID pass,” the report adds.

“In the year of the UK’s G7 presidency, there has never been a more momentous opportunity — or need — for the government to show global leadership.”

“One [option] is that everyone just does their own thing, which is much more chaotic and difficult to manage. Or secondly, there’s a set of [global] rules in place that you may not be that happy with,” Blair told The Telegraph.

“It’s better to have common rules and a common verification system, so that people know what your disease status is and know it with some validation,” inisted the globalist leader — raising the prospect of a worldwide health authority chosing who can travel, and who cannot.

Reports indicate that health and tech giants including Microsoft, the Mayo Clinic, and Oracle are already working on a digital vaccination passport.

Top government ministers previously denied that the British government was looking at such a document, amid fears that it could introduce a “papers, please” culture redolent of the worst excesses of Continental European government, in which the unvaccinated could find themselves reduced to second-class status.

Despite these denials, the government is now already trialling vaccine passports in the form of smartphone apps,

The European Union has already announced that it will “recognise” vaccine passports, and is actively considering proposals to issue them to all vaccinated persons.

Mr Blair did not indicate whether or not the introduction of Global Covid Travel Pass requirements should mean that border forces could begin turning back the illegal aliens who have continued to enter British territory in large numbers throughout the pandemic, apparently unaffected by travel bans.