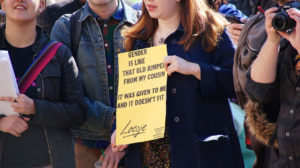 In October 2019, two trans activists on Twitter campaigned against Always, a brand focused on female hygiene products. The issue was that their products weren’t inclusive of women who had become men, and those who identify as neither male-or-female.

The activists questioned whether the use of the Venus symbol, the astrological sign for women was necessary on product packaging. A product that has obviously targeted women for decades.

Without fail, the company Always responded and rebranded packaging to be inclusive almost immediately. The campaign was in October and the redesigned product would be in stores by January 2020. Yet another victory for alleged gender equality.

CHECK OUT: New Jersey man charged with making a terrorist threat after coughing with intent.

We live in an upside-down world, where the illusion of equality is used to bully anyone with differing opinions. Right now only a handful of groups are being given weight in debates and one of them is the trans community.

They don’t seem to get that this imbalance between men, women, trans, gay, is the complete opposite of what most people want — true equality.

Worse still, those groups with the power are regularly untouchable ignorant bigots. More so than those they call out. A strong example is the dismissive comments made on Twitter by the TransActual group towards women who were opposed to the move made by Always. One comment read:

The tweet, which is directly targeting the numerous women who were angered by the decision to rebrand by Always clearly calls them out as having a fragile sense of self. This is ironic considering it was the fragility of trans and gender binary people who had campaigned to have the rebranding changed in the first place.

It would have been interesting to see the response if Always said to the trans activists at the start, “you want the Venus branding removed? Wow, don’t you have a very fragile sense of self!” It would have ended in court for sure, with Always bent over the docks having to pay horrendous fines and apologizing for being insensitive to equal rights, but it is okay to ignore the “fragile” women offended.

Just by looking at that one tweet by Trans Actual, the world can see they’re bigots. It clearly shows intolerance toward those holding different opinions, specifically the women opposed to the brand change. Yet, there is no blowback from people in positions of power despite the outrage it caused. That is the definition of hypocrisy because if Always stood up to the trans activists the world would have come down on them.

We’re choosing to ignore the part of the tweet that says “…subtly acknowledge that trans men and non-binary people get periods too” because wherever you stand on the transgender debate, biology or feelings, the world is being overwritten whether you agree to it or not.

From gender-neutral bathrooms to headlines in NPR articles, the most vocal are on a pedestal. It’s time the women who were offended boycotted and campaigned against Always just as the trans activists did. Buy different brands of the products and visit different sites. Don’t give them your money or attention because the only strength groups being ignored have is in their numbers.

It is a tactic that would be effective because of the countries demographics. In the United States, there are 327 million people, 4.5 percent identify as part of the LGBTQ community, with trans people totaling 0.6 percent overall. The question is, how have these groups become so vocal and important compared to the rest of the population?

The reality is if women did boycott Always, a Procter & Gamble product, the company would be put into a unique position. In the end, money would win because shareholders are the only thing above the “feelings” of those groups on a pedestal right now in the United States.