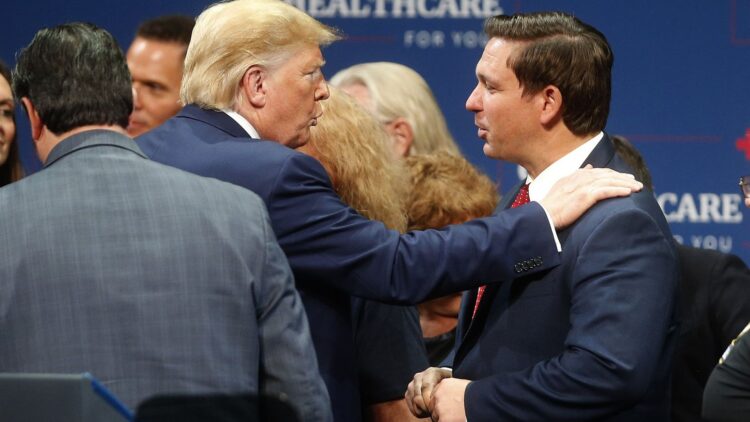 Former President Donald Trump proclaimed this week he is “100%” considering a run in 2024, and Florida Gov. Ron DeSantis is “certainly” being considered as his running mate. Trump also commented on President Joe Biden’s first 100 days in the White House and the raid of Rudy Giuliani’s Manhattan apartment by federal agents. POLL: What scares you the most?

“Rudy Giuliani is a great patriot. He just loves this country, and they raid his apartment,” Trump said Thursday during a Fox Business interview.

“It’s like so unfair and … it’s like a double standard like I don’t think anybody’s ever seen before,” Trump said of the treatment of his former personal attorney. “It’s very, very unfair. Rudy is a patriot who loves this country.”

“I don’t know what they’re looking for or what they’re doing,” the former president told host Maria Bartiromo. “They say it had to do with filings of various papers and lobbying files. Well, did Hunter [Biden] file? Did [President] Biden file? Because they did a lot of work with other countries. To the best of everyone’s knowledge, they didn’t file.

“It’s a very, very unfair situation,” he added. “It is so terrible when you see the things going on in our country with the corruption and the problems and then they go after Rudy Giuliani. It’s very sad, actually.”

Trump highlighted the allegations against former Secretary of State John Kerry of disclosing intelligence to Iran that Israel was behind more than 200 attacks on Iranian interests.

“It is incredible because you bring up John Kerry and the horrible thing that he did and was doing for a period of time,” Trump said.

Trump ripped Biden for not addressing the border crisis during his first speech before a joint session of Congress on Wednesday night.

“He didn’t discuss the border and the fact that tens of thousands of people are pouring into our country, many of them criminals, many of them, people from jails, many of them doing acts that you don’t even want to know about,” Trump said. “The wall is almost completed. It would have been completed if I didn’t get sued by Congress and the Democrats every single moment — and we beat those cases. And they just don’t want to finish it.”

Bartiromo asked Trump if he is considering running for president in 2024, and he said he is 100% thinking about another run. On Wednesday, Trump told Dan Bongino that “right after” the 2022 midterm elections would “probably be the most appropriate time” to announce if he would run for president again.

“The border has to be brought back to where I had it,” the 45th president of the United States said on “Mornings with Maria.”

“Your gasoline prices, look what’s happening to them. They’re going up, through the roof in a short period of time,” he continued. “I had them down below $2 and we still had a strong energy industry.”

Trump was asked about DeSantis as a potential running mate in the 2024 election.

“He is a friend of mine. Certainly, Ron would be considered,” Trump replied. “I endorsed Ron, and after I endorsed him, he took off like a rocket ship. He’s done a great job as governor. They like that. I’m just saying what I read and you read. They love that ticket.”

During this year’s Conservative Political Action Conference in late February, Trump was named as the most popular Republican presidential candidate for the 2024 election. The CPAC straw poll found that Trump was the favorite candidate for 2024 with 55% of the votes, followed by DeSantis at 21%, South Dakota Gov. Kristi Noem at 4%, and former U.S. Ambassador Nikki Haley at 3%.

A Just the News survey conducted Feb. 25-27 asked registered Republican voters which GOP leader they would want to run for president in 2024 if Trump isn’t in the race. DeSantis was seen as the heir apparent to Trump and was the leading candidate with 21%, followed by Cruz at 18%, and Haley at 10%.

An Echelon Insights poll released on Wednesday named DeSantis as the GOP favorite if Trump doesn’t run for president in 2024. With 20% of the votes, DeSantis leads the pack of Republican candidates, followed by Pence at 16%, Trump Jr. at 9%, and Cruz at 8%.