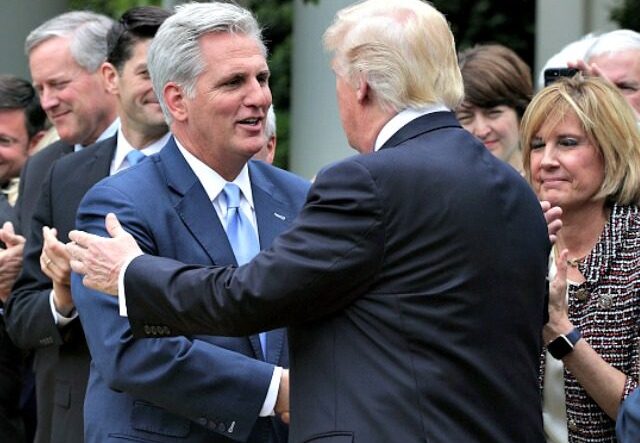 “Congressman Kevin McCarthy is an outstanding representative for the people of California and a strong and fearless leader of the House Republican Conference,” the former president said in his enthusiastic endorsement Sunday.

After praising McCarthy for his “tireless” advocacy for the people he represents in his district, Trump said the congressman from California has been “working incredibly hard to Stop Inflation, Deliver Water Solutions, and Hold Joe Biden and Nancy Pelosi Accountable for their catastrophic failures and dereliction of duty.”

Speaker of the House Nancy Pelosi (D-CA) smiles after receiving the gavel from Rep. Kevin McCarthy (R-CA) during the first session of the 116th Congress at the U.S. Capitol January 03, 2019, in Washington, DC. (Photo by Win McNamee/Getty Images)

“Kevin McCarthy has my Complete and Total Endorsement for California’s 20th Congressional District!” he concluded.

Should Kevin McCarthy be reelected for another term (as is expected), he stands a good chance of becoming the next Speaker of the House if Republicans take back the majority in the coming November midterms.