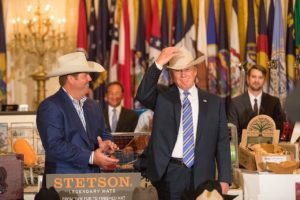 President Trump, addressing reporters at the White House, added that he could imagine Acosta likely wishing he handled the Epstein case differently.

The president’s comments came after Acosta hailed the newly-brought sex trafficking charges against Epstein, while defending his decision to cut a plea deal with the wealthy money manager over a decade ago regarding a sex abuse case.

“The crimes committed by Epstein are horrific, and I am pleased that NY prosecutors are moving forward with a case based on new evidence,” Acosta tweeted earlier Tuesday. “With the evidence available more than a decade ago, federal prosecutors insisted that Epstein go to jail, register as a sex offender and put the world on notice that he was a sexual predator.”

Now that new evidence and additional testimony is available, the NY prosecution offers an important opportunity to more fully bring him to justice,” the Trump cabinet member added.

In 2008, Acosta, then a Miami-based federal prosecutor signed off on a plea agreement that allowed Epstein to avoid prosecution on federal charges. The hedge fund manager ended up only pleading guilty to charges of soliciting a minor for prostitution. He served just 13 months in prison. On Saturday, Epstein was arrested in New Jersey on sex trafficking and conspiracy charges. Federal prosecutors in New York alleged he paid dozens of young girls to engaged in sexual acts with him between 2002 and 2005 at homes in New York City, Florida, and his Carribean private island. He pleaded not guilty on Monday in New York City.

Meanwhile, congressional Democrat leaders are calling on Acosta’s resignation over the case’s handling.

House Speaker Nancy Pelosi (D-CA) tweeted on Monday evening: “.@SecretaryAcosta must step down. As US Attorney, he engaged in an unconscionable agreement w/ Jeffrey Epstein kept secret from courageous, young victims preventing them from seeking justice. This was known by @POTUS when he appointed him to the cabinet.”

On Tuesday, Senate Minority Leader Chuck Schumer (D-NY) joined the speaker, accusing the former Miami federal prosecutor of being too lenient with the wealthy financier.

“Instead of prosecuting a predator and serial sex trafficker of children, Acosta chose to let him off easy,” he said Schumer. “This is not acceptable. We cannot have as one of the leading appointed officials in America someone who has done this.”