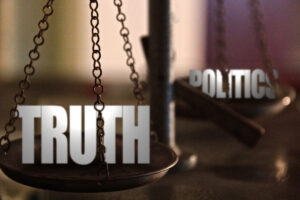 It’s only now, after several weeks of silence that Joe Biden has come forward with a press release denying sexual assault allegations.

The denial comes as no surprise, but it’s the media’s silence and Democrat’s unanimous support that had us wondering, at what point does truth over politics become a factor?

Before the Biden press release, one Democrat did put truth over politics. It’s a move that’ll see him shunned by his fellow party members because saying something that wasn’t part of their agenda is an act of treason.

The Democrat who has stepped into the light is the fourth-term congressman from New York, House Dem Hakeem Jeffries. He said on WNYC: “It’s got to be taken seriously because this is a serious allegation raised by a serious individual and needs to be investigated seriously.”

The congressman doesn’t disown Biden, he simple adds: “We’ve probably got to hear from [Biden] at some point directly.”

And now that we have heard from Biden directly, we predict Reade will be investigated hard by the mainstream media.

CHECK OUT: Deep State Coup, all of America should have chills.

Truth Over Politics And Lies

Here’s the bipartisan truth. No one is saying Biden is guilty, but hiding behind other Democrats and what is meant to be unbiased media isn’t something any American wants in a President.

Tara Reade, who accused Joe Biden of sexually assaulting her in the early 90s, when she worked as one of his staffers, has faced a media blackout. With people on the left unanimously supporting Biden as if the #MeToo movement never happened.

Reade continued: “She’s been sitting on the information for over a month and she always says, ‘well I want to play devil’s advocate.’ So I’m either getting ignored or I’m covered but they just sit on it and they don’t air it.”

ABC did go on to publish an article at the end of April but only after Reade accused ABC of sitting on the interview. The ABC article was headlined: “At women’s event, Biden navigates around lingering sexual assault allegation.”

ABC also famously covered up a story about Jeffrey Epstein in 2019 and Reade believes what they did with her interview is more of the same.

Ironically, Biden in his press release said: “Responsible news organizations should examine and evaluate the full and growing record of inconsistencies in her story, which has changed repeatedly in both small and big ways.”

It sounds like the media blackout is over and the guard dogs have been let off their leads.

Investigate To Save America’s Democracy

As the story unfolds, the public statements from five different people who have corroborated Reade’s accusation will become scrutinized by the mainstream media in a way that Brett Kavanaugh had several hundred articles wrote about him when accused of assault.

Its ironic that Brett Kavanaugh’s accuser was backed unanimously but Reade will be the one under investigation here.

Reade, who is on record as saying she made harassment complaints in 1993 against Joe Biden. An event that those who she allegedly reported to are now denying ever happened, according to Biden’s press statement.

Records of these reports should be somewhere if they exist.

The question is will the former vice president, who is now facing pressure to unseal documents from his time back in the Senate, do so.

However, in the press statement, Joe Biden said: “There is only one place a complaint of this kind could be – the National Archives. The National Archives is where the records are kept at what was then called the Office of Fair Employment Practices. I am requesting that the Secretary of the Senate ask the Archives to identify any record of the complaint she alleges she filed and make available to the press any such document. If there was ever any such complaint, the record will be there.”

Now that Biden has opened up, it’s likely his press release will dominate the mainstream media’s headlines for a while. Let’s hope that all the sexual assault allegations that have been made against Biden are investigated because if he is elected, and one of American’s enemies has evidence, it puts the country in trouble.

CHECK OUT: Great news for President Trump regarding 2020 election.