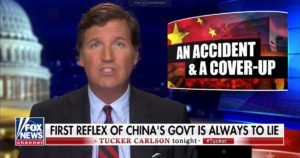 Whether you’re a fan of Tucker Carlson or not, his monologue naming reporters who are towing China’s propaganda is revelatory. In any sane world, there would be investigations and accountability. Sadly, we don’t live in a sane world.

Carlson ended his monologue with: “(China sees COVID-19 as) part of a larger geopolitical struggle for control of the world. Most Americans don’t perceive that or understand the profound gravity of the stakes involved. How could they? Our leaders have lied to us about it for years.”

When a statement like that can be said on TV, on a news show, and the world’s media pays it little-to-no attention, the severity of the problem is clear. We’re reliant on the President and other world leaders standing strong against China’s global plans.

In the monologue Carlson said: “Chinese officials have tried to squelch all conversations about who’s responsible for this pandemic by inflaming the political sensitivities and race guilt of American elites.”

It began when the Chinese state media said: “Racism is not the right tool to cover your own incompetence.” It targeted President Trump who was calling the pandemic “the Wuhan Virus.”

The fact Tucker Carlson then called out media outlets as “relatively easy to corrupt” highlights the problem facing America, and the world when trying to point the finger of blame at China.

The issue goes far beyond the media. In the monologue, Carlson said: “According to an informed U.S. government official, quote: “Beijing has instructed diplomats in their consulate in San Francisco to work with American state and local officials, and members of Congress, to push back against anyone who gets too far out on blaming China for this (pandemic).”

The big question is, how high up and far does China’s influence go in the United States?

CHECK OUT: Time to get out of Communist China, Japan makes first move.

Depending on the news sites you read, China is the source of COVID-19 and it doesn’t want the truth to come out. From the silencing of whistleblowers to blaming Italy and the United States over the pandemic.

What we know for certain is that the truth is out there and according to Tucker Carlson: “Analysts from the CIA [Central Intelligence Agency], the NSA [National Security Agency] and others have briefed staff (at the New York Times).”

Based on the report: “COVID-19 originated in a Wuhan laboratory not as a bioweapon, but as part of China’s effort to demonstrate that its efforts to identify and combat viruses are equal to or greater than the capabilities of the United States.”

It makes sense, considering the mayor of Wuhan said: “about five million people left the city before it was placed on lockdown.” This happened on January 23, yet China didn’t confirm human-to-human transmission to the World Health Organization until January 30. Considering January 24 – 30 is a national holiday in China, the timing of it all seems more than coincidental.

To continue from Tucker Carlson’s name dropping, in the report it reads: “They’ve (CIA and NSA) been unable to interest our media or our epidemiologists in writing about it. In recent weeks analysts from the CIA, the NSA and others have briefed staff at The New York Times about the origins of this virus, but the newspaper has still not reported their findings.”

This leads back to his monologue, where he calls the media “relatively easy to corrupt.”