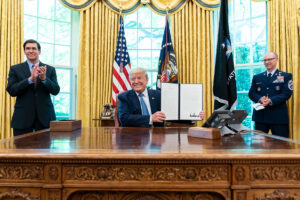 The President’s tweets about Mail-In voting were flagged on Twitter by a new fact-checking rule. Ironically, an election professional has proven that Twitter’s fact-checking wasn’t fully accurate.

The tweets, which had a link added by Twitter saying “Get the facts about mail-in voting” led to a page with the headline “Trump makes unsubstantiated claim that mail-in ballots will lead to voter fraud.” This is followed by the statement: “Trump’s claims are unsubstantiated, according to CNN, Washington Post, and other fact-checkers.”

The page only included articles from mainstream media and pro-Democrat outlets.

Since the fact-checking, the President has signed an executive order that calls for regulating online censorship on social media platforms and Twitter has again flagged a President’s tweet (below).

Unsurprisingly, Twitter is happy to put their violations and fact-checking front and center on the President’s account, but they’re not showcasing that they were forced into changing their previously stated facts — because they were inaccurate.

An election professional pointed out a mistake in Twitter’s statement regarding mail-in ballots. The Twitter statement partially read: “Mail-in ballots are already used in some states, including Oregon, Utah, and Nebraska.”

The issue is that Nebraska sent applications to vote by mail not actual ballots.

The election professional wrote: “While all states allow absentee voting via the mail, only a handful of states including Oregon and Utah automatically send registered voters mail-in ballots. Nebraska, in contrast, recently mailed applications to every voter — in response to the pandemic, and the state didn’t automatically send ballots.”

This fact was reported by a Wall Street Journal reporter in the following tweet.

It is a minor error, but in a world where facts are constantly questioned by the left and right, any inaccuracy, especially one that’s going to be shown to 30.1 million people, should have been 100-percent accurate. Especially when saying their facts are the ones to be believed.

Twitter has since updated the language in their statement without any accompanying announcement.

Here’s the issue with fact-checking, it’s easy to miss something.

For example, it’s obvious that Twitter’s mainstream media fact-checkers missed a report by the Commission of Federal Election Reform, who wrote in 2005 that absentee ballots were the biggest concern when it came to voter fraud.

In that 2005 report, which was titled ‘Building Confidence In U.S. Elections’ it read: ‘These (absentee voter) risks are compounded by the practice of ballot harvesting — that is, coordinated efforts to have third parties collect absentee ballots from voters and drop them off at polling places or elections centers.”

This means the validity of what the President tweeted is all down to the government’s accuracy regarding registered voters and whether a state has ballot harvesting.

In 2017, a report came out saying that the United States had 3.5 million more registered voters than living adults. Proof the government doesn’t have accuracy when it comes to voter registration.

In April 2020, House Speaker Nancy Pelosi put ballot harvesting into a coronavirus relief bill, trying to make it legal nationwide. Plus, ballot harvesting, which is already legal in California was allegedly used in 2018 to influence elections.

The Washington Examiner wrote: “Pelosi’s bill would legalize ballot harvesting. This practice allows any person to collect and turn in someone else’s ballot with little limit on how many voters a single agent is working for. In 2018, Democrats used California’s newly enacted ballot-harvesting rules to flip seven red districts blue. Pelosi’s plan says states must accept unlimited ballot harvesting everywhere.”

So, Mail-In voting could, and allegedly has impacted elections in California. Plus, if it went nationwide, surely there’s cause for concern over its impact on the 2020 election? All of which validates the President’s original tweets.