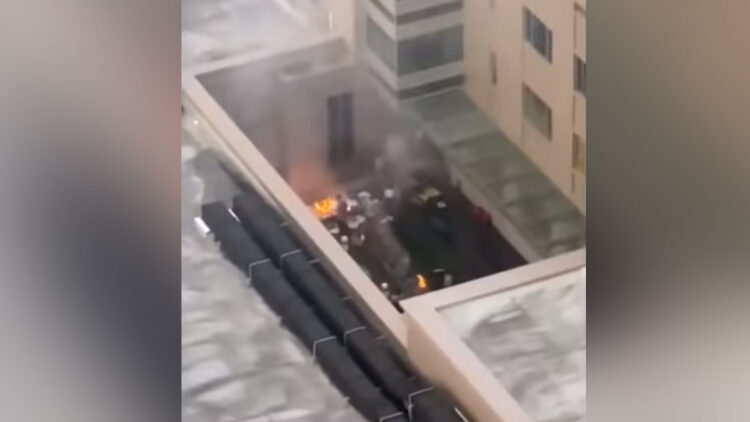 Friday 24, 2020, China orders the United States consulate in Chengdu to close. A move that can only be described as retaliation for America ordering China’s Houston consulate to close two days prior.

While China’s action has no purpose, the closing of the Houston consulate was reportedly ordered to protect American intellectual property and private information of U.S. citizens.

What Happened In Houston

After the order, people working at the Houston consulate began burning documents. Firefighters were called in and according to the New York Post, a video showed: “Several people bustling around multiple burning trash cans in the building’s courtyard.”

As strange as it seems, we’re not sure if this is standard practice for a closing consulate or proof of wrong-doing.

CHECK OUT: According to one Democrat congresswoman, President Trump has sent his federal forces to Democrat-led cities so he can force a coup after he loses the 2020 election.

What we do know is that tension between the United States and China is increasing, and the blame game seems neverending.

A spokesperson for China’s Foreign Affairs Ministry said: “The measure taken by China is a legitimate and necessary response to the unjustified act by the United States.”

This statement is proof enough that China is closing a United States consulate in retaliation only. A legitimate and necessary response would be to request that the American government prove allegations against China’s Houston consulate were true.

However, that’s going to be difficult after documents were set ablaze.

The spokesperson continued: “The current situation in Chinese-U.S. relations is not what China desires to see. The United States is responsible for all this. We once again urge the United States to immediately retract its wrong decision and create necessary conditions for bringing the bilateral relationship back on track.”

Just like with China’s COVID-19 propaganda, China is pinning the blame on the United States.

CHECK OUT: Did you know 62-percent of Americans are afraid to speak about their political beliefs?

The United States Consulate In Chengdu

The United States had five consulates spread across mainland China. These included Chengdu, Guangzhou, Wuhan, Hong Kong, Shanghai, and Shenyang. There is also an embassy in Beijing.

According to Eurasia Group’s Michael Hirson, who in a previous interview with CNBC stated that: “If they were to choose an important but still secondary consulate like Chengdu or Shenyang, that would be in keeping with the role that the Houston consulate serves.”

So China has picked an equal United States consulate to balance against the closing in Houston.

Hirson continued: “If they were to close the Hong Kong consulate, that would be then thrusting this dispute into what’s already very serious impasse of course with the future of Hong Kong and Hong Kong’s autonomy. So I think that would be the most escalatory move in terms of closing the consulate.”

The issue is that the United States closed China’s Houston consulate for reported genuine reasons. It wasn’t to escalate tension.

So regardless of whether consulates have an equal value to each nation, only one acted out of retaliation. China is the one escalating tension.

CHECK OUT: Watch an Antifa punk get slammed to the ground after messing with the wrong person.